Let’s give credit to SEGA for producing one of the most entertaining arcade shooting gallery games around. The trusty light gun from the arcade version of Virtua Cop has been replaced with the mouse, but gameplay has remained unchanged from its coin-op counterpart. 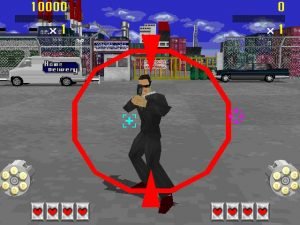 You’re thrown into a crime-ridden city and at first have to make due with a six-chambered revolver. The thing needs constant reloading by tapping the right-mouse button, but at least you get an infinite amount of ammo. And so you should, since the game will throw waves of trigger-happy bad guys at you in seemingly triple digit numbers. There isn’t much room for strategy here – just great reflexes and a sharp eye for new targets. Later in the game you’ll pick up better weapons, including a rifle, shotgun, machinegun and a magnum with armor-piercing rounds.

You also have the rare chance to pick up an extra life marker, which is very helpful as you only start with five and lose one with every hit you take and every civilian you ventilate by mistake. The title screen also offers an option to practice your shooting in a training mode. This mode has the player in a shooting range and presents a series of challenges against a variety of moving and stationary targets. A welcome addition that can help newcomers to the genre. In all, it’s a fine offering, and while the crude 3D graphics might not be as nice as some of its pre-rendered competition, VCop does offer plenty of fun as a straightforward mid-afternoon blast-a-thon.