Enemy Nations sets you down on an uninhabited planet along with a number of other races, and challenges you to build a colony that will dominate the landscape. You can jump into a world set to custom parameters, or ease into gameplay with a multi-part tutorial game with specific goals to introduce game concepts. The number of opponents on the planet, level of difficulty, your own race, and the size of the planet can all be customized. The twelve races all have the same basic buildings and units, but feature different skills (such as good production but poor combat ratings).

The planet surface comes complete with trees, bodies of water, and coal, oil, iron, and xilithium deposits. Each player starts with a rocket filled with a set amount of supplies, two trucks, and a crane for building structures. After setting the rocket down in an area with a good mix of minerals and a defensible perimeter, you begin harvesting trees, producing food, and building a colony from scratch by placing different kinds of mines, factories, buildings, offices, houses, and other essential structures.

The interface for interacting with all this is fairly good. Information about colonists, resources, and power are always on screen, and giving orders or finding buildings is fairly easy to do. The map is rendered in high-res detail and can be fully rotated and zoomed to view buildings and units from any direction or height. Unfortunately, the color palette is a little mushy, and units often blend into the background and become hard to see. Infantry units in particular are poorly rendered. 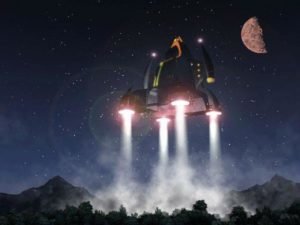 Research is complex, as you try to find just the right balance between increasing the effectiveness of your units and that of your structures. Minerals become more crucial with scarcity, and while the AI isnâ€™t aggressive enough to make the enemy an ever-present threat, waging war is an important issue throughout the game. Combat is handled well, with a diverse mix of weapons, weapon levels, and fortifications to make both offense and defense tactically interesting. In all, Enemy Nations is more brains than looks, but it has a system that deserves credit for being somewhat original and worthwhile.