If The Bardâ€™s Tale rings familiar, it’s probably because you remember the old series form the 80s and early 90s. It was one of computer gamingâ€™s classic franchises. In this more modern remake, you play the Bard, a man with a â€œelfish attitude and singular pursuit of coin and cleavage, and the game is built around your journeys through a dangerous but often humorous world that is a mixture of serious adventure and funny jokes. It’s not just an RPG, but a satire of RPGs. But the core gameplay isn’t exactly a mirror image of the classics. It uses a top-down camera of your character set in a 3D world, with an awkward keyboard and control scheme and no quicksaving feature. If all of these are red flags suggesting a console port, then you’re right – because it is. You play the game as… a Bard. He’s funny, selfish and cynical one at that, whose sole interest is ‘coin and cleavage’. You start out in a generic quest to kill a rat (what else?), but eventually embark on an adventure to save the fair princess Caleigh from an evil cult.

Combat is real-time, a combination of button mashing and tactical thought somewhere between Champions of Norrath, the source of the gameâ€™s engine, and Knights of the Old Republic. While fighting will involve mastering action-oriented controls, itâ€™s no purebred action game. Itâ€™s largely a single-player game, with a second player able to control one of The Bardâ€™s summoned creatures. In fact, these guys inspire a whole lot of The Bardâ€™s magical ability, as they can do everything from pick locks to hurl fireballs. While The Bard may specialize in various forms of combat and weaponry, any less mundane abilities will depend on what you summon.

The Bard has been around the RPG block, as it were, having starred in way too many of them, so cynicism and self-mockery abound. To that end, things like the +4 Mace of Smiting are out; look instead for the â€œ+5 Lance of Hemorrhoidal Swelling.â€ Comedy is a key part of the game, although it doesn’t feel gratuitous. Instead, it’s the sort of jokes that you would expect from guys who enjoy and are familiar with the genre. And even though The Bard isn’t all that likeable, he is self aware enough to not take everything as a joke, in a very Monty Python’s King Arthur sort of way. Running jokes balance out the large helping of serious combat and traditional role-playing action, but this is definitely not your average doom-and-gloom plot that takes itself way too seriously. The console versions of the game will shipped first, and the transition from PlayStation to PC is definitely the game’s first issue. The reasoning behind this seemed to have been money (there just wasn’t enough cash around to develop the PC version separately, and doing a console-to-PC transition is much cheaper than vice versa). Still, the soul of the game is all there, and it’s an unusual beast to behold. But can a humorous, somewhat bawdy, self-aware protagonist carry a console-PC hybrid role-playing game to the heights of critical success without pissing off diehard PC players? The answer, in this case, might be positive. 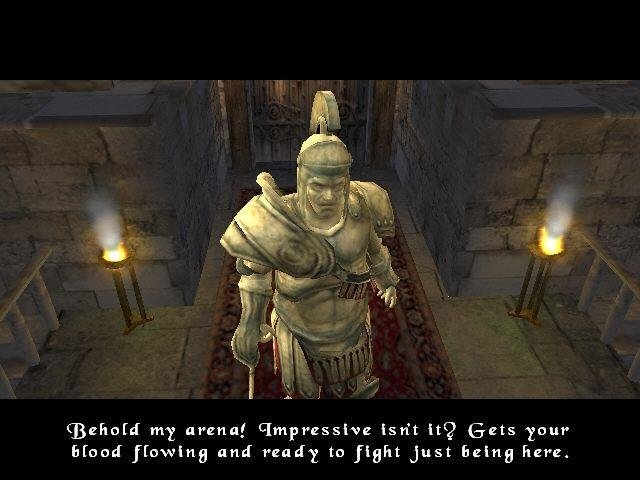