The basic premise of This Means War! is quite amusing. In the last years of the 20th Century, a game called Snark Hunter (created by a mysterious programmer known only as “Shadowhawk”) suddenly appeared on all the online services and captured the imaginations of gamers to a fanatical degree. Everybody was playing it, obsessively, until a mega-virus hidden in the game infected every computer system on the planet. 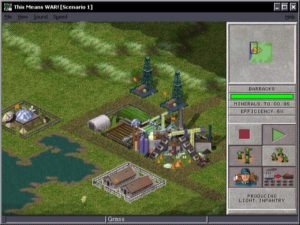 In an amusing twist, when you start This Means War! you’re greeted with a mock menu of Snark Hunter, and fidgeting in any way with the game releases the aforementioned virus. In any case, you’ve probably already figured out where this is going – social chaos, confusion and finally war between the few remaining factions left on Earth. The game plays out in real-time in the same vein as Command & Conquer. You develop and hoard resources, and set up research facilities to crank out new and better weapons. A global map shows you each faction.

Each side has a Command Center; knock out the enemy’s, and you win. Other structures include farms, mines, oil wells, steel mills, and factories. Click on the Command Center and drag to a suitable clear area, and you can establish a new population center. All other structures have to be laboriously built by engineers.

It takes a while to get used to playing this game. Units move over a grid of squares, but the squares are not shown on the map. A unit moves from the center of one square to the center of another. Once it is on its way, it won’t respond to new orders until after it reaches the center of the square it is currently headed towards. If it is a slow moving unit, reaching this next “turning point” can take some time. 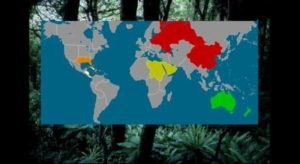 Don’t expect the wild speed of C&C to spill over here though. This Means War! is a more complex and slower RTS game. The inclusion of experience and formations give it some extra depth. On the down side, the interface is clunky, especially for this genre, and overall game speed is often way too slow. This and the general anemia of the gameplay makes TMW fall behind more advanced titles.