Battle Mages from Russian-based publisher Buka is the usual stew of strategy and role-playing that seemed so common after Warcraft III. There’s also a hint of Sacrifice and Rage of Mages thrown into the game. The main gist of it is a generic romp through a fantasy setting replete with monsters to kill, towns to get quests from, artifacts to find (and equip), and a hero which you can upgrade with spells and experience.

Unfortunately, there’s no proper ‘hero’ character to behold during battles. You are the hero per se, but you float around in an ethereal manner and never directly participate, acting more as an invisible commander viewing the action from up high, occasionally casting the odd spell here and there. It’s a new concept (sort of), but it doesn’t really work for several reasons. 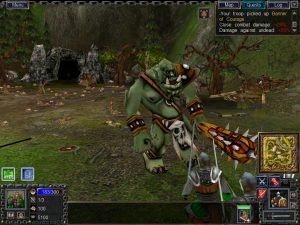 For one thing, you never really feel any connection to your character. They do have a portrait and specific character attributes which you may upgrade (they transfer to either your magical abilities or your troops’ combat proficiency), but with no voice or any sense of presence, you’re merely a soulless spell dispenser. Sure you can equip artifacts for your troops, but you won’t care since their all nameless pawns. In short, simply having a hero character present in the field might have been much better.

The other letdown are the controls. You have a free-floating camera that you can look around with, and this allows you to view the entire map quite easily. The problem is that it also removes any sense of exploration, as maps always start out as completely revealed. In many missions you simply have to guide your army through long stretches of roads and whatnot, and these endless trips become quite boring. Granted, other RTS games involve unit shepherding that can be just as stale, but at least there you actually explore a hidden map – here it’s all revealed on the onset. Annoyingly, an artificial gimmick hooks the camera to your troops – stray too far from them, and your mana starts depleting. It just feels forced and oddly designed. 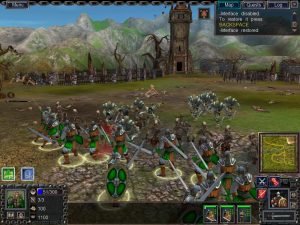 The combat too is equally iffy. The AI seems competent enough to fight on its own without your constant input, but then the interface goes astray with missing basics like waypoints or having the ability to check your enemies’ hitpoints. A map highlights your troops but you can’t use it to quickly change the camera or issue orders. An insipid story won’t keep many through the campaign grind, and an optional multiplayer will only please the die-hard. There are plenty of fantasy strategy games one can sink their teeth into these days, and while Battle Mages definitely does look the part, it doesn’t play like it at all.