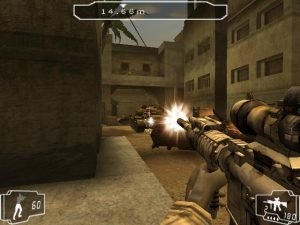 The most noteworthy part of Shadow Ops: Red Mercury is technical: it ships on DVD only, and it’s THX-certified, meaning the explosions are really explosive. It’s a weird game, a rather brainless but still polished budget game. You’re Frank Hayden, but it really doesn’t matter if you were Sam Fisher, Agent Jones or B.J. Blazkowicz. You have a deep voice and a special set of skills, and can perpetually make anything you do look cool. You’re also searching the world for Red Mercury, a substance that, when mixed properly in a cool suitcase, makes really big explosions.

The storyline features the interesting framing device where you start with one of the last levels, then go back in time, but the plot is just silly. It’s challenging, but frustratingly so. The story is told through very grainy cutscenes (shouldn’t a game on DVD have DVD-quality cutscenes?). Think tons of rotating cameras for no apparent reason, low angle of our hero, random slow-mo, inappropriate dialogue, implausible plot twists… in other words, it’s kind of like Bad Boys of Pearl Harbor. Only in this case, it’s also in a tryst with Black Hawk Down, with Tom Clancy watching via infrared camera.

The action itself is incredibly straightforward. Despite the presence of realistic weapons and settings, this is no tactical shooter — it’s pure linear run-and-gun. Befitting its console cross-platformness, there are no mid-mission saves. You either complete the whole thing, or start over. That wouldn’t be an issue if the game weren’t so bloody hard: even with the most generous hit box area of any recent shooter, it ranges from “annoying” early on to “you must be joking.” Powered by the Unreal engine, it looks decent, but the animations and particle effects are sub par.

Shadow Ops is just another military shooter swimming in a sea of camouflage. It’s got most of the genre’s moves down, but nothing really stands out. The single-player game is lengthy but runs out of steam after the first five hundred bodies hit the floor. The combat is loud, but never intense or much fun.