Welcome to the post-apocalyptic world of Earth 2150, where the planet’s orbit has been irreversibly destabilized and is sent flying into the Sun. To avoid a slow and agonizing roasting, the three remaining civilizations of Earth go at each other’s throats for resources and power on a dying planet. Whichever side you choose – the Soviet-style Eurasian Dynasty, tech-savvy Lunar Corporation or American UCS – your goal will be the same. To amass enough resources for the construction of an enormous evacuation ship, saving your citizens and dooming all others. Earth 2150’s premise gives the campaign a genuine sense of urgency that goes beyond routine base building familiar to most C&C clones. You have a limited time to complete the game, just under 182 days, as represented by a real-time day-night cycle. It includes customizable units, cool 3D and an unconventional campaign. You begin Earth 2150 on a frozen planet that gradually thaws as it approaches the Sun, taking a more menacing look in its final days before finally resembling Hell in its entirety. If you haven’t saved enough resource by then, you’re doomed.

Earth 2150 works by assigning you a central base that operates parallel to individual missions. You can ship units and materials via your transporter from your home base to an ongoing mission anytime. Your home base will always be safe from attackers, and it’s where you construct the evacuation ship. A fine balance is needed between spending credits on units and base building within each mission and saving money for the greater good. Also, units garrisoned in your central base will be kept between missions, so it’s a good idea to ferry your best surviving combat troops before moving on.

Yet another somewhat original feature is the unit customization model. From the very start of the game, you must piece together your own combat units via the Construction Screen by combining a chassis with a weapon. Much like in Total Annihilation, new construction options will be available for research as time goes on, leading to more powerful (and expensive) combat units to be created. This research model is so restrictive that not even repairers can be built by default, and it takes a few missions before these become available. Unit construction does not have the range of options present in Total Annihilation, with a few chassis and weapon types available for each class of unit. You’ll also notice Earth supports neat 3D graphics. The camera is manageable, supporting rotation, zooming and panning. The 3D engine boasts dynamic lighting and some spectacular explosions, yielding one of the better looking first generation 3D RTS games. The interface is tolerable, but far from perfect. The unit selection panel is tucked away on the lower part of the screen and can become quite a nuisance to handle, made more so by barely legible text (see the ED control panel if you don’t believe me).

Fortunately, most of the game can be controlled with the mouse, but some important functions (like building rotation) need to be toggled vie the right hotkey. Finally, pathfinding is a little suspect over long distances, with units frequently being blocked by impassible terrain that could be easily bypassed. These aren’t fatal quirks however, and Earth 2150 can prove a very engaging strategy title once you commit to its involving long-term campaigns. 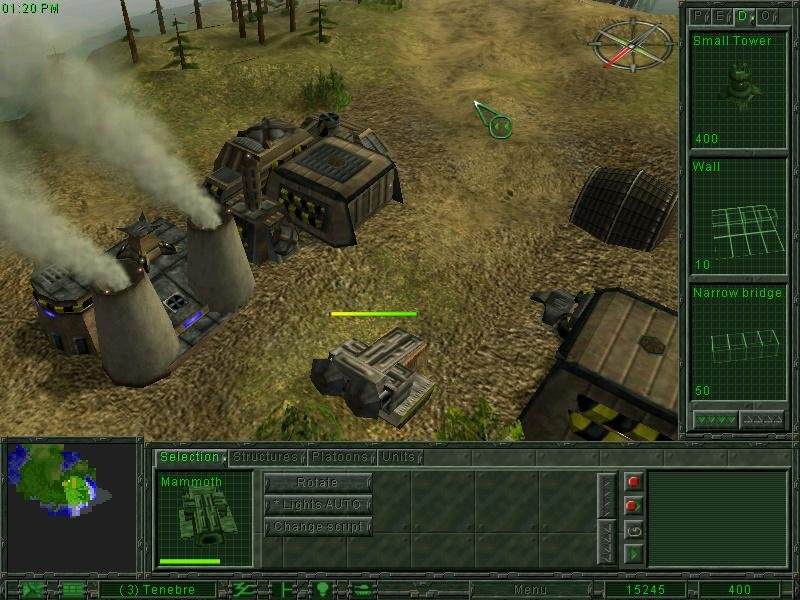