Still a peasant herding exercise at its core.

Empire Earth is an ambitious design, but only because it has so much stuff in it. There are fourteen eras, each the equivalent of an age in Age of Empires, ranging from prehistory to the hypothetical future. Each epoch has unique artwork and units. There are infantry, dogs, cavalry, archers, siege engines, ships, and eventually aircraft, tanks, and artillery, all in varying flavors appropriate to the epoch. There are spell-casting prophets. There are priests who convert the other guy’s armies. Each of the 200 or so units can be customized by upgrading one or more attributes: firepower, range, hit points, armor, and so on. A wonderful Greek city. Or is it Roman?

There are technologies that improve your units’ stats or your civilization’s resource gathering. There is farming, foraging, hunting, fishing, logging, and mining. There are food, wood, stone, iron, and gold. There are 21 civilizations with specific bonuses. There are eight formations to put your units in. There are six Wonders of the World. There are four AI settings for each unit’s behavior. There’s a 3D engine. There are two victory conditions. And there’s basically one way to play – gather a bunch of resources!

It’s as if all that other stuff just falls away, betraying Empire Earth as yet another game about resource gathering. The winner is almost invariably the guy who cranks out enough peasants (called citizens here) to gather the most resources and who most efficiently converts them into military units. There’s something profoundly disappointing when such a vast game ultimately comes down to herding peasants. This isn’t to say that there isn’t a lot of tactical variety in the way the units fight. There is, but in the end, it’s driven primarily by simple economics.

EE most immediately resembles Ensemble’s Age of Empires. This is hardly surprising considering Rick Goodman was on the design team for both. The interface, the subject matter, the unit graphics, the marketing, and even the title seem calculated to say “Hey, if you liked Age of Empires, you’ll like this, too!” Which is probably true. Although both games have a historical motif slathered over them like icing, Empire Earth eventually turns into a sci-fi battle bot arena with special spell powers like cloaking (Refractive Cloaking), unit shields (Diffraction Shields), mind control (Assimilation), and teleporting (Teleporting).

Empire Earth’s greatest strength is that the epochs play like different games. Pay a sum of resources and you can upgrade to the next epoch, unlocking new units and technologies. You can effectively limit games to one or two epochs by playing with standard rules, in which the cost of “epoching up” is so prohibitive you’ll only see two or three before the game ends. Alternately, you can play tournament rules, in which the epoch costs are reduced to encourage faster progression and more variety. You sunk my battleship!

If you start at the prehistoric epoch, you’ve got a fairly tedious game with cavemen throwing rocks at each other. Then you get an Age of Empires clone for about three or four epochs. When guns and cavalry come into play, the game mechanics shift substantially. Then powerful artillery and machine guns dominate the battles, followed by tanks rendering cavalry obsolete. Then aircraft really shift the mechanics. Then a show-stopping nuclear bomb makes an appearance. Then the battle bots arrive and all pretensions of realism go out the window. Empire Earth ends with the defenestration of historical value.

Later stages of the game rely on more conventional combined arms attacks. Take out anti-aircraft guns with long distance artillery and follow up with bombing campaigns. Move in with infantry to kill your enemy’s citizens and cripple his economy. This works well enough with Empire Earth’s interface, which builds in nearly anything you’d expect in a real-time strategy game. One notable problem with the interface is that managing aircraft and naval units is like herding blind cattle. Combine an unwieldy system of separate waypoints for fighters, bombers, and individual planes with limited fuel for each aircraft and you’ve got stray airplanes everywhere. It’s a problem the enemy AI doesn’t seem to notice.

Although each of the epochs encourages different tactics, Empire Earth wisely keeps base building and resource gathering consistent. Once you put up your walls, defensive towers, and basic unit-building structures, and once you’ve got your citizens going about their gathering, you can leave them alone and concentrate on military units. This is particularly important because even though the game ostensibly shows unit stats, it relies heavily on an under-the-hood system of unit trumps. Age of Empires did something similar, but it was limited to a fairly intuitive “cavalry trump archers trump infantry trump pikemen trump cavalry.”

Empire Earth, on the other hand, literally requires half a dozen flow charts to explain the unit relationships. Some of these are fairly silly. Why is a galleon more effective against a battleship than a frigate? Why are cavalry with guns more effective against other cavalry than infantry? In the final epochs, it breaks down into an arbitrary sci-fi slop. Let’s see, tanks are good against Pandoras, infantry are good against Minotaurs, Hyperions are good against both, and none are good against anti-tank guns except for Zeus robots. It’s almost pointless to show a unit’s stats when there are so many exceptions to whether an attack rating of 200 is better than an attack rating of 100. For such a derivative game, Empire Earth does have a few nice twists. As in Age of Empires, you can build wonders of the world for an alternate victory condition. But like wonders in Civilization, each one actually gives you an advantage. There is an adjustable unit limit, but it’s a global figure split among all surviving civilizations. This is a great incentive for defeating other players and it means bonuses that increase your limit can give you a significant advantage. The number of citizens that can gather resources from each source is limited, so competitive economies will have to expand across the map. This greatly discourages turtle-style players.

But on the whole, Empire Earth plays a lot like a hundred and one other real-time strategy games. It’s a very old school game. It tries almost nothing new. But manages to add lots of good stuff to the old. 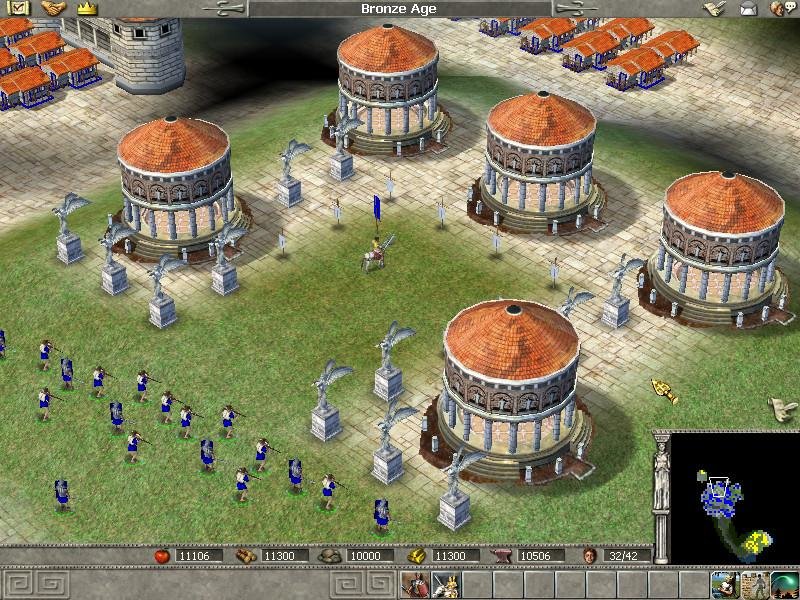