Let’s not have unrealistic expectations. Fate, an action role-playing game, is a budget release. Itâ€™s a simple formula, on the surface: a dungeon, a Foozle, and as many random number generators as needed to occupy the player between the two. It’s an old idea that was tried with Sacred, Divine Divinity, Dungeon Siege, and of course Diablo. In Fate, you play a hobbit out to invade the local mega-dungeon and score scads of experience, skills, loot, and, uh, fish. If the plot seems largely nonexistent in that description, itâ€™s because the gameâ€™s designers figured we wanted less text scroll and more plunder. FATE is essentially Diablo, streamlined and polished until just the really fun bits remain, like the dungeon crawling, the wholesale pillaging, and the character dress-up. All of the good stuff is in there: gambling for high-ticket gear, socketed items to customize, shrines, and random enchantments.

There are also random quests that scale well to your characterâ€™s level, which provide you large experience boosts and nab you â€œfameâ€ (which in turn grants you access to better kit). Better yet, thereâ€™s a simple yet oddly absorbing fishing mini-game, which is certain to key into any of your obsessive-compulsive disorders. Early on, it can nab you fish to temporarily transform your surprisingly capable AI pet into a more powerful form, or even a low-level artifact or two. As you delve into the lower floors of the dungeon, fishing can nab you permanent transformations for your pet, or score you the uber-artifacts whose sale can finance your gambling addiction and the expensive fame upgrades from the local bard. There are no classes in the game, just skills such as Attack and Defense Magic, weapon specialties (including dual-wielding), and various passive skills like Critical Strike and Spellcasting. This allows you to develop your character as you see fit, and means that all of the loot you get is largely usable save for specific minimum base requirements. Fate strikes an elegant balance when it comes to difficulty, and features the best method of handling character death seen in any game of this type.

Instead of losing your items and reappearing in town, it gives you three options: sacrifice a chunk of fame and experience for an on-the-spot resurrection; pay a big fine in gold and get dumped in a random nearby level; or just drop all your gold where you died and then trek back down to get it. Usually, itâ€™s easiest to opt for the second optionâ€”while the game makes experience easy to get, losing fame really hurts.

Fortunately, death isnâ€™t that common, even on the Hero setting. Dying is almost never due to controls, but rather overconfidence and negligence, as it should be for games of this genre. The interface itself is a joy, much as it is in the Blizzard games. Colorful feedback is always available, and each button and click has a specific, obvious, on-screen response. The backpack sorely needs a sort button, though. 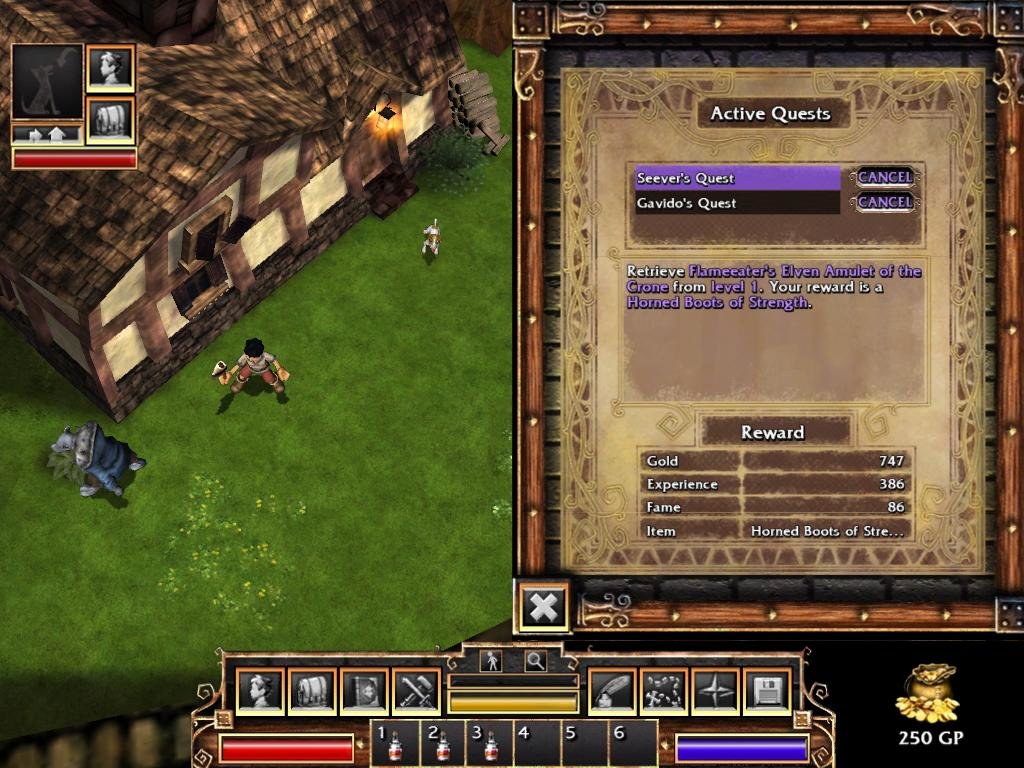