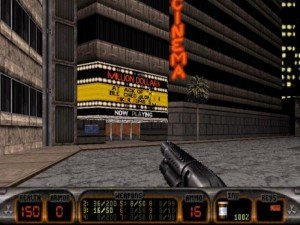 Not many games feature adult theaters as levels.

For better or worse, we all know the man. He last reared his buzzcut head into gaming when Forever came out of its coma. But Duke Nukem was kicking ass 2D-style in arcade sidescrolling adventures as early as 1991, then known as ‘Duke Nukum’. Years passed and 3D Realms started their four-year long project of bringing Duke into the realm of DOOM-style first-person shooters. But unlike the legion of DOOM clones that so characterized mid 90s gaming, the Duke would up the ante by offering more interactivity within a realistic setting, and giving their anti-hero an actual personality to identify with.

There’s something we might call a plot, but really it’s an excuse tying the packet of inter-connected levels together – all 28 of them neatly compressed into three distinct episodes – that will have you visit, to name just a few places, several seedy urban establishments around Los Angeles, an outlying canyon wasteland, an orbiting space station, an alien mothership and a secret moon base, all crawling with…you’ve guessed it: aliens. They’ve come to kidnap our chicks (?!) and it’s up to Duke to save the day and dispose of any assorted alien scum that try to stop him.

Although the plot is basic, it’s worth noting how consistently well the levels tie in together. As you reach the prerequisite end-of-the-level switch, you’ll often catch glimpse of what’s in store in the following area, and you always progress logically from one place to another – eg: you travel from downtrodden city streets to a seedy movie theater, then to the Red Light District just as the next level starts. Indeed, traversing through these places will quickly make you notice the centerpiece of what the game has to offer – the fantastic level design.

And that’s what it’s all about. Simply put, these were some of the best looking levels ever depicted in a computer game, and the range of stuff happening around you as well as the interactive possibilities, from flipping light switches to forking out dollar bills to pole-straddling strippers, makes the game rock. 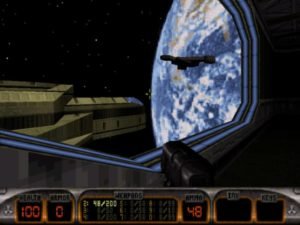 One has to notice the engine’s many included features in this regard, all of them allowing designers to get more creative with their levels – destructible environments, more detailed textures, slopped surfaces (useful for creating caves), underwater locations, reflective walls and a lot of other advanced stuff coded into the Build engine, which, although initially programmed in 1993 by Ken Silverman, managed to really pick up steam after powering Duke 3D. But for all it’s bells and whistles, it’s not quite 3D – the overhead sector-based system meant you had to keep a horizontal viewing angle.

The game did allow the option to look up or down, but doing so would skew the view quite a lot. Even so, the engine was way ahead of its time, and was later used to power several other shooters down the line, many of which were highly successful as well (Shadow Warrior, Blood, Redneck Rampage, etc.) 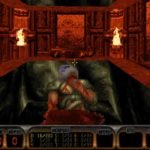 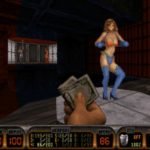 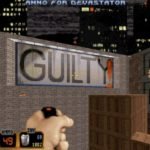 Duke’s take on the OJ Trial.

But it’s not just the level design that’s great, although it does rank highest. Unlike other shooters where you’d have a throwaway protagonist driving the action, Duke is actually a guy you’d sorta root for. Between delivering one-liners and tipping strippers in a sleazy bar, Duke is noted for having a sense of humor. And that humor extends into the overall design and feel of the game as well, with numerous 90s pop culture references scattered everywhere (like Star Trek, Indiana Jones or the O.J. Simpson trial). 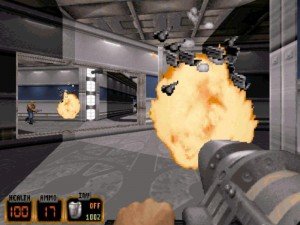 Even with all of these clever touches, one might only wonder how much better this game would have been if it moved past the tried-and-tested DOOM formula that’s so central to gameplay. It’s still a very primal affair of continually shooting stuff and collecting key cards on the side, the two characterizing design conformities of 90s action gaming. Possibly going for the ‘it ain’t broke so don’t fix it approach’, 3D Realms nonetheless managed to polish this formula and give it a new lease on life, simultaneously ensuring that one of gaming’s most prevalent pseudo-celebrities won’t drop and die anytime soon.