A heavily pimped out Hornet, with a canned campaign mode. Originally released on the Mac, F/A-18 Hornet 3.0 offered a great flying simulation experience by delivering one of the most accurate and detailed avionics around. Hornet has slowly gained a loyal following among PC users, and then F/A-18 Korea has arrived to parlay that loyalty into something bigger. For the most part, Korea is an enhanced and expanded version of Hornet 3.0. But a good deal has been done to make it feel more like a new package than a rehash, although some of the flaws and limitations of the predecessor keep it partially grounded.

As the title indicates, this is a simulation based on the F/A-18 multi-role strike fighter, which deploys from both airfields and carriers. And one trip to the cockpit makes it clear youâ€™re playing with the big boys now. The avionics suite is about as close as you can get to spot on, with the TDC, displays, and radar sub-modes recreated in exacting detail. The functionality, power, and limitations of the sensor systems is remarkable, and delivers a consistent authenticity to the whole shebang.

Not only does everything look and act as it should thanks to pre-rendered cockpit art and thought-out controls, there is a logical set of view modes that helps computer pilots view the action just like their real-life counterparts. The padlock view can lock on anything, and the quick view and virtual cockpit are both designed for maximum situational awareness. The realism continues, for the most part, to the flight modeling.

The most notable enhancement are the visuals, with the addition of 3dfx support, and itâ€™s a true overhauling of the graphics engine. To keep the frame rate consistent in software, shaded polygons, rather than textures, provide smooth frame rates with or without acceleration. With 3D acceleration on, Koreaâ€™s graphics are a big leap over Hornet, with detailed object modeling and fluid terrain. Sadly, these graphic flourishes donâ€™t extend to the front end which has the same clunky knee-board design as the old version. This interface is one of the problem areas that bring Korea down. The mission data is lean, presented with a too small a map. There is no mission planner for the campaign, and hardcore players will be aghast to hear that waypoints may not be edited or even viewed. The only thing that can be modified prior to a flight is weapon loadout. Additionally, Korea is sorely lacking in its campaign mode and mission design. It has a very lackluster campaign game: choose one of four missions, repeat six times — and thatâ€™s the campaign. Only 28 true missions are included, with the option of playing over LAN multiplayer.

The few interface quirks and the canned mission elements aside, there is still a lot of value in F/A-18 Korea as a combat flight simulation, and the updates from its predecessor are more than noteworthy here. If you want to try out a game with a solid an approach to detail as the higher end flight sims, you’re in good territory. 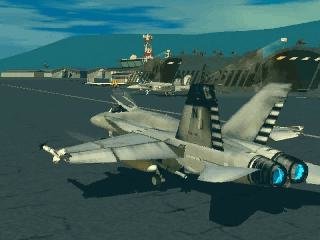