Duke for president of the multiverse.

Dukeâ€™s back for an official encore. Available in two flavors, the Plutonium Pack add-on for the original or the full fledged Atomic Edition, both come with Duke Nukem 3D version 1.4 and a bonus episode entitled â€œThe Birthâ€. It takes you through another eleven action packed levels which serve to remind us why the original was so good to begin with. New enemies, varied locations, one bonus weapon (the “Enlarger” – basically a reversed Shrinker) and the same hectic action of DN3D means there’s lots of cool alien blasting to be had here.

The Atomic Edition’s bonus episode has Duke going through a variety of amusing locales, some paying homage to such movies as Mission: Impossible, Alien and Independence Day. These levels carry weight since they were actually created by the guys at 3D Realms. The levels are very fun too, and show some very keen use of the Build engineâ€™s ability to create floors over floors. But just the general hilarity and the themepark feel of it all is enough to pick it up.

Also included with this pack is the official Duke Nukem screen saver, jigsaw puzzles and desktop themes, and, as part of the Build Engine 1.4, the Duke tag multiplayer game, wherein you and your fellow Dukers try to tag certain parts of their opponentâ€™s side of the level all the while blowing up enemy teammates and avoiding getting yourself blown up in the process. There are a couple of new monsters (including a devilishly tough Alien-lookalike), a new Alien Queen end boss whom youâ€™ll face in an underwater lair, and plenty of new textures and landscapes.

This upgrade should be appealing to those who enjoy using the Build editor because of the new textures and weather effects. Overall, these levels are solid and tough as well as incredibly funny. Suffice to say, if youâ€™re a Duke fan, then youâ€™ll probably want to pick up the Atomic Edition. 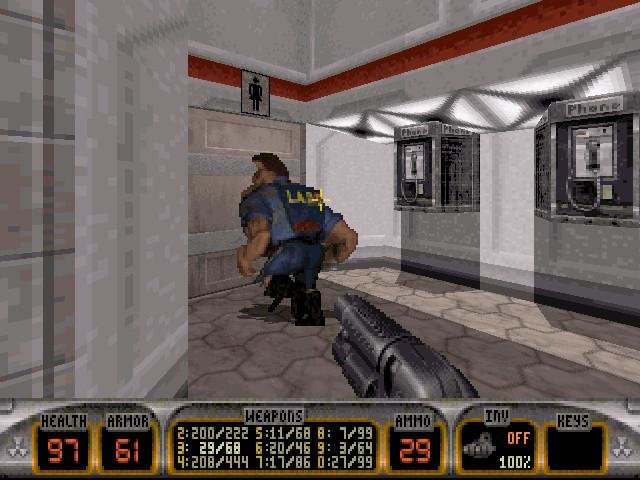