Bullfrog has a long record of producing high quality games – Populous, the Magic Carpets series, and now Dungeon Keeper. The twist of Dungeon Keeper is that you’re the evil guy, tasked with protecting a dungeon by foiling the efforts of would-be heroes trying to break in for gold and glory. At its basic level, it’s a devious real-time strategy construction game, but you can think of it as Theme Hospital with torture chambers and vile demons instead of doctors.

The game involves a series of â€œlands,â€ with varying levels of challenges of the playerâ€™s ability to manage and expand an underground kingdom. Foes include an assortment of hero types, who occasionally try to slaughter the dungeonâ€™s inhabitants and steal their treasure, and other dungeon keepers, who basically attempt to do the same. In the game’s multiplayer portion, players create dungeons, research spells and rooms, populate their realms with creatures, and wage war upon each other. No single element in Dungeon Keeper is earth-shaking, but all elements work together in synergy. Sound, humor, atmosphere, look and feel, and pacing are all well done. The 3D mode that lets you view the action from a first-person creature view is nifty, the user interface is slick, and the game seems to be technically solid. But while entertaining, the 25 solo and 15 multiplayer levels go by surprisingly quickly. Make no mistake – although dungeons and noble knights are virtually synonymous with D&D, Dungeon Keeper has more to do with real-time strategy than role-playing.

It’s still entertaining nonetheless. So if slapping imps, torturing noble knights, and commanding foul legions of the undead gets your juices flowing, then Dungeon Keeper is for you. 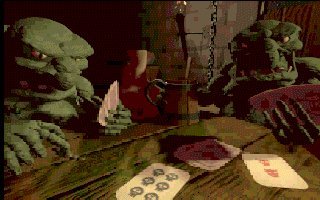