Vigilance’s biggest problem rears its head early and often – no in-game saves. That’s right, you have to play through an entire level (and my, what big levels they are) in one playthrough. If you get killed, welcome back to square one. Luckily, the gameplay isn’t of the one-shot-you’re-dead variety; it’s closer to Quake than Rainbow Six, offering armor and health aplenty to soak up the bullets. The levels are mildly interesting, although you can count the interactive elements on two fingers: buttons and doors. There are lots of wide-open areas for sniping at the magically spawning, stupid, and generic enemies (see one henchman of an evil terrorist organization bent on world domination and you’ve seen ’em all). The levels present an acceptable sense of depth: the Mediterranean monastery has sunlit walls, the office building under construction has an emerging art deco tackiness, and the underground dock is threaded with ducts and pipes for your creeping pleasure.

The control scheme is an admirable attempt at something new, but it’s not entirely successful. Unlike simple strafing, you can easily move in a straight line while looking around in all directions. The controls are extremely configurable, so you can patch together the interactions of movement, aiming, mouse, and keyboard however you like. Although this setup is more dynamic than your garden variety mouselooking, it’s a toss up whether it’s worth climbing the learning curve. One of the more compelling aspects of Vigilance is the character variety you can choose from. There are about a dozen skills and each character has two of them. You can choose the G-man with the suit and glasses, the busty blonde with boots and a tight shirt, the tattooed bruiser with extra health, the smooth British Bond, and so on. It might have been interesting to swap characters when you’re having trouble on a level, but SegaSoft has made this effectively impossible; you can only save the game after you’ve chosen your character for a given level.

There is a good variety of weapons, but the differences among them aren’t clear. Rate of fire seems more important than ammo type, which means the pistol is a better weapon than the shotgun. With stronger multiplayer options (it only offers basic deathmatches, although the single player levels would have been ideal for co-op), Vigilance could have risen above its shortcomings. But in the end, it’s a very basic shooter that reeks of a console port, even though it isn’t. It’s an arcade shooter from the blast, and it’s just not good when compared to its betters, like Half-Life. 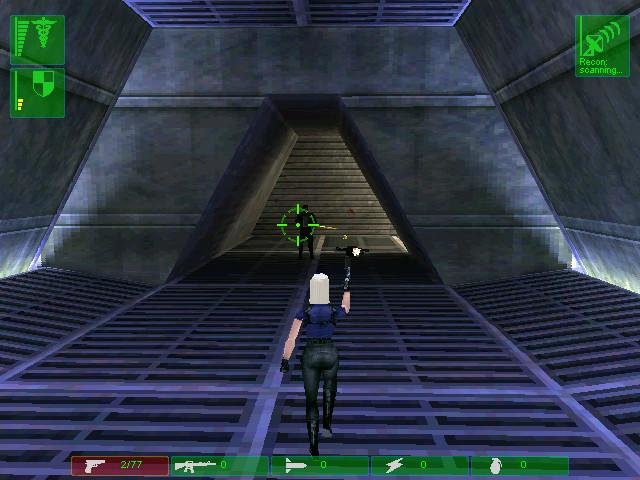