Most superheroes live by a couple of strict moral standards, like protecting the innocent or bringing criminals to justice regardless of what danger they’re put in. Enter the grainy moral world of the Punisher from Marvel Comics, however, and those standards quickly become irrelevant. Frank Castle only became the Punisher after his family was murdered by mobsters. Vowing to exact revenge on all criminals, the Punisher goes on a rampage of destruction, wiping out the criminal underground from its infested core within New York City.

Unlike other heroes (or anti-heroes) in comic books, the Punisher doesn’t have superpowers. His only weapon is suicidal determination combined with military-grade weaponry. You initially start out with the simple shotgun and pistol, but will eventually unlock grenade launchers, heavy machineguns and accurate assault rifles as you massacre your way through each mission. The action is pretty simple, with a health bar that goes back to normal once you execute brutal ‘quick kills’, and a blue “Rage Meter” that slowly fills and which temporarily turns you invincible when you activate it. It also lets you perform more violent kills using throwing knives.

A few gimmicks attempt to keep the action from turning too stale. You can, for instance, interact in several ways with your enemies that doesn’t involve directly shooting them. There’s the quick kill option mentioned earlier, which can only be triggered if you get close enough. But you can also grab enemies to use as human shields, torture them through several harsh interrogation methods, throw them off buildings or push them through doors and laugh as the poor sap absorbs the wave of bullets from his buddies’. All of this is done to rack up points which you can use to unlock new guns or concept art. Despite these distractions, the action always boils down to shooting everything in sight. Normally this wouldn’t be a bad thing, but it’s not very engaging here, and tends to run stale after several levels. You quickly realize that the main challenge the game throws at you is to gun down ever larger hordes of armed mobsters, druggies, thugs and other assorted scum. Even the interrogation minigames are more for show – you can gun everyone down and will still be able to complete the game, albeit with a lower score.

The AI is competent at keeping the combat interesting, at least. They won’t ace any intelligence tests, but can hide behind and fire from behind cover. Kill most of the guys in a room and the last dude will usually just drop his weapon and give up – you can leave him or entertain your inner sadist. And while you can use human shields, so can the enemy – they can grab civilians and shoot from behind them, and you could save them provided you care about your score. 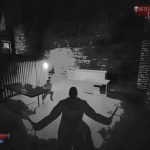 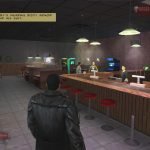 The Punisher seems to borrow a few game elements from Max Payne. Besides sporting the trenchcoat and emo attitude, your character can also do side, forward and back dashes. But with no mullet time, these tactics are pretty much useless. What the game could really use is a cover system, since often you have to peek clumsily out of corners to get shots at enemies.

The graphics look good on the PlayStation and Xbox, but seem washed up and simplistic on the more advanced PC. The action itself won’t win any awards. It’s fun in a dumb sort of way and will occasionally put an evil grin on your face with its gratuitous violence, but it grows thin faster than you’d expect. By the time you’ve seen every quick kill animation, used every interrogation method and have gunned down a couple of hundred armed goons, there’s just fewer and fewer reasons to come back for more.