It’s Rainbow Six set in World War II (but not quite as good). Hidden & Dangerous from Czech-based developer Illusion Softworks is a mixed bag. The engine does impress the eye with real-time shadows and particle effects, but on the whole the textures look washed out and the animations crude. The controls are sloppy and unresponsive, the camera wobbly and the third-person shooting awkward. And while it’s halfway entertaining as a stealth/action game after some practice, Thief: The Dark Project and Metal Gear Solid have pulled off the same tricks with greater finesse.

You will encounter your first bit of consternation in Hidden & Dangerous after listening to the mission briefing of campaign one, mission one. You’re told to get across a bridge undetected. You can spend a lot of time trying to do this before you reach the conclusion that when a mission says “undetected,” what it means is “leave no witnesses alive.” The real goal in this, and most missions, is just to kill everyone.

There are six World War 2 “campaigns” of anywhere from one to six canned missions each, for a total of 23 missions. At the start of each campaign you’ll pick up to eight soldiers from your pool of talent to participate in the missions for that campaign (four soldiers per mission, the rest of the campaign team are replacements). In addition, for each campaign you select the weapons, ammo and equipment you’ll take. There’s a weight limit to prevent you from taking enough stuff to supply an entire regiment.

This is a nice idea on paper, but since you have no idea what each mission will entail until you get to it, your success is based on either luck, replaying a campaign, or letting the computer outfit you and trusting it. For instance, if you take 3 explosive charges on a campaign, then find that in one mission you have to blow up two objectives, and in another you have to blow up three, you’re out of luck. Time to back up to the start of the campaign and try again. Trial and error is a theme the runs deep in Hidden & Dangerous.

Once in the mission, you can jump from one soldier to the next. You can use the map feature to set up routes for the men to followâ€¦ you might want to play with this for grins, but usually you’ll want to control the men individually. It’s almost impossible to place, for instance, a machine gunner in an optimal position with the map mode. Until you jump into that man and see the battlefield through his eyes, you won’t know quite what his field of fire is. You can also order other members of the team from within the game engine (run up to them and yell “Follow me!” and they’ll tag along behind you); this feature sees more use than the map mode. The AI is a jumbled mess of inconsistencies and occasional pleasant surprises. What makes this truly surreal is the behavior of the enemy. Sometimes when you pop a Wehrmacht soldier, his alarmed friends will start running around like mad looking for you. If they actually head in your direction and come into targeting range, your other soldiers cut him down with their semi-auto weapons, while you keep sniping. How nice! The artificial intelligence of your squad mates is pretty good in these conditionsâ€” they’ll even move around to stay in cover or to get a better line of sight to the action.

More often, however, the other enemy soldiers will just stand around or continue to patrol, stepping over their fallen comrade with nary a glance. This makes the game more arcade-like but shatters any pretense at realism. Sneak behind a villa and take out the guards in the backyard. Those in the front will keep patrolling, those inside will continue to stand there in “we’re gonna surprise the intruder” positions. At other times, you can poke your head over a rise and an enemy half a kilometer away will instantly spot you and put a bullet through your noggin. 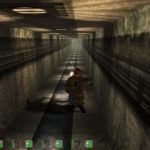 When the missions remain outdoors, Hidden & Dangerous can be fun. It’s when you have to go into houses that it begins to fall apart. First, the engine has difficulty keeping the camera in position as you move through doors. Your view will be blocked for the crucial seconds of first entering a room, then the camera will swoop sickeningly around to get a good shot. The obvious solution is to switch to first person mode, but that doesn’t work very well for movement. You tend to lurch around an awful lot, and your view lurches with you. Pathfinding through tight corners tends to haywire the squad AI as well. At this point you realize that a lot of Hidden & Dangerous centers around the save/explore/die/restore cycle, which is the point at which you will want to stick it on the shelf. Before it was patched, the game war notoriously buggy. Your men will spontaneously die with no enemies near. They will fall through the world. They will fail to negotiate a ladder and fall to their deaths. Weapons will suddenly disappear. Sometimes your men will shoot away their entire magazine through armored cars, or other such impervious objects, trying to hit an enemy.

Hidden & Dangerous can be occasionally fun, but it’s doubtlessly a sub-par shooter and stealth game. For the first hour or so, every moment of fun will get overshadowed by mountains of frustration. Still, if you’re a hardcore gamer looking for an old fashioned WWII-themed shooter, then maybe the initial aggravation might be worth it in the long run.