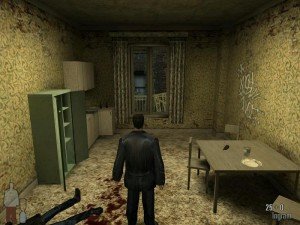 You’ll visit a bunch of unsavory places in NY, like these slums crawling with addicts and mobsters.

“The end of the world had become a clichÃ©. But who was I to talk, a brooding underdog avenger alone against an empire of evil out to right a grave injustice. Everything was subjective. There were only personal apocalypses. Nothing is a clichÃ© when it’s happening to you.“

Come winter, I present to you Max Payne, a hard-boiled cop that’s on a one-man rampage against New York’s seedy underworld during the worse winter storm of the century. Max Payne was possibly the gaming world’s first proper blockbuster – it was fast, sleek and explosive, and also helped popularized Bullet Time as a central gameplay mechanic.

As with all games of the series, Max Payne is a completely story-driven cop thriller. You start in flashback mode, as Max returns to his suburban home to find his family brutally murdered by a gang of junkies. As action games go, the story is rather interesting, involving a few twists and turns, run-ins with the mob, government conspiracies, and powerful mysterious strangers. There are Norse mythology tie-ins everywhere, some obvious and some obscure. A combination of in-engine cut scenes and graphic novel style story panels tell the tale, interrupted only by Max killing his way up the criminal underworld for answers, usually in slow-motion. The fire effects can go a little overboard, but these scenes do look cool.

So the story isn’t anything to die for. It’s a hackneyed, noir-esque piece that rips off every John Woo or Steven Seagal film. But as far as cinematic influences go, one cannot neglect the brooding dialogue, sleek leather, dark style and slow-motion action scenes that were so immortally popularized by 1999’s ‘The Matrix’, which was first to even coin the phrase ‘Bullet Time’. Although the game was long in development before The Matrix invaded our imagination, hints of the movie are pretty much everywhere. Just in the introductory tutorial level you walk around empty streets and alleyways learning bits of the game by answering payphones.

The action starts inside a frozen New York, with locales ranging, but not limited, to subway stations, harbors, seedy motels, upscale office buildings or nightclubs ‘flickering to a machinegun beat’, as Max himself puts it. All of these environments look believable and highlight Remedy’s fantastic MAX-FX engine, which took a staggering four years to fully develop.  Considering how advanced the engine was at the time, it’s only surprising how Remedy never licensed their product to other high-profile gaming projects.

The ability to slow down time and shootdodge your way through mobs of enemies is central to gameplay. Time slows down to 50% while your reticule speed remains fixed at 100%, allowing for precise shots and dodge maneuvers in the heat of battle. You’re limited to using bullet time in short spurts, however, leaving it best saved for those fights that are too chaotic to resolve at normal speed. Your slow-mo hourglass then slowly regenerates as bodies pile up around you. The bullet-time effects wouldn’t look nearly as impressive without all the fabulous destruction that your stray shots cause. Wildly varying impact effects bring the environments to life and make the chaos of a pitched gun battle all the more exciting. Shoot a tile wall and it erupts into a shower of dust, leaving a cracked hole behind. Molotov Cocktails explode into furious balls of fire that ignite surrounding areas, leaving behind patches of charred remains. Boxes erupt into splinters, cash registers shower dollar bills, TV screens and monitors break. The degree to which the environment reacts to being shot cannot be understated.

Although entertaining on the first run, there’s not much point replaying Max Payne once you’ve already wrapped it up once, or at least not immediately. Completing the game unlocks further difficulty settings and enables you to jump to each level individually without needing to go through the entire game. By default you start with only one available difficulty, but the game compensates by slightly adjusting the AI based on your performance, either heightening or lowering various gameplay parameters to keep the challenge going, or cutting you some slack if you repeatedly fail. Multiplayer is completely missing and this might further lower the game’s lifespan on your hard-drive after the initial run. Yet even as such, Max Payne remains a solid interactive action flick that should please any twitch gamer.