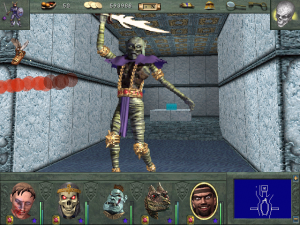 A game of M&M8, towards the end chapter.

Might and Magic VIII: Day of the Destroyer is like most Might and Magic games, though here you start out as a single character and must find willing adventurers to join you in your quest to save the land. Along the way you have to fight monsters, solve quests, upgrade your characters and ransack dungeons, all of which will be covered in this guide.

Your starting character isn’t as important in Might and Magic 8 since you’ll eventually be able to hire four more party members, offsetting any initial weaknesses you may have. The types of characters you’ll hire will be your prime concern, since forming a balanced party (made up of fighters, clerics and mages) is quite important. Here’s a rundown of each character class.

Cleric
Promoted to: Priest of the Sun
Promotion Quest: Prophecies of the Sun
Alignment: Clerics are primarily healers and support casters. They can cast important stat-boosting spells that help your party, and is also the only class who can max out the Light skill. They make average combatants, though they can wield a mace and wear medium armor competently to be an asset in close combat. They also make quite good traders.

Dark Elf
Promoted to: Patriarch
Promotion Quest: Basilisks Aplenty
Alignment: These guys are archers with a side focus on basic elemental magic. They also bring their own spell repertoire, much like Vampires. They are highly charismatic and hence can max out the Merchant skill, and thus your party will likely never have serious gold shortages. They’re also the only character who can max out the Disarm Trap skill, although the Necromancer’s Telekinesis spell does the same thing.

Dragon
Promoted to: Great Wyrm
Promotion Quest: Dragon Hunters Must Die
Alignment: You can’t start as a Dragon, but boy are they fun when you get them in your party. In fact, they sort of make the game too easy. Their ranged attacks deal good damage without consuming any spell points. Their specialized spells give them even more powerful dragon breath attacks, and there’s even one spell that lets you fly around.

Knight
Promoted to: Champion
Promotion Quest: Finding What is Lost
Alignment: Knights are purely combat-oriented, which is why they can max out all combat-related skills except for Axe and Bow. Their damage output can further be upgraded with Body Building and Armsmaster. Knights are good craftsmen, and can repair broken items in the field – a skill that will become steadily more useful towards the end of the game. A knight’s high amount of hitpoints will also mean that he will usually be the last guy standing after a brutal fight.

Minotaur
Promoted to: Minotaur Lord
Promotion Quest: The Missing Axe
Alignment: Minotaurs lean mostly towards combat but also have access to a few Clerical skills. They can heal your party and boost their strength, but not quite as competently. They’re also the only class that can max out the Axe skill, but unless you find a unique axe to use within the game, this isn’t particularly useful. One interesting limitation is that they can’t wear helmets or footwear, which is quite a drag. Advanced players who think the Cleric will make the game too easy might consider recruiting a Minotaur.

Necromancer
Promoted to: Lich
Promotion Quest: A Lost Book in a Library?
Alignment: Necromancer are exclusive spellcasters. They have access to all elemental schools within the game, and also the Dark skill, which contain some of the most devastating spells available. He’s very weak, unfortunately, and can only defend himself with either a dagger or staff. The trade-off is worth it, though. Not only are his offensive spells powerful, but useful resistance spells ensure that your party is ready to deal with elemental monsters late into the game. And don’t forget the Town Portal or Loyd’s Beacon spells – both will remove hours of pointless walking through the lands, or provide quick escapes. Oh, and they can bake good potions, too.

Troll
Promoted to: War Troll
Promotion Quest: Ancient Homelands Become the New Homelands
Alignment: Trolls are comparable to Knights, in that they specialize in combat. They can’t wear the heaviest armor, but make up for it by having extra hitpoints. Unlike the Minotaur, they don’t have any armor restrictions, but nor do they have any magical abilities.

Vampires
Promoted to: Nofseratu
Promotion Quest: Aren’t the Remains Supposed to he in the Sarcophagus?
Alignment: Vampires, like Dark Elves, are hybrids that specialize in combat and a little bit of spellcasting, and are immune to mind attacks. More importantly, they have access to their own batch of vampiric powers.

Hired help is important in Might and Magic 8, but most people won’t want to join your party initially. Here are all of the hired help you can find in the game to help you map out a path for the best possible group of adventure-seekers.

ClassRace: Male Patriarch
Level: 30
Stats: Might 17, Intellect 23, Personality 13, Endurance 17, Accuracy 25, Speed 23, and Luck 17.
Skills: 6 Expert, 4 Master
Join Conditions: Look for him in Alvar after you have finished with the Alliance quests.

ClassRace: Male Minotaur
Level: 5
Stats: Might 21, Intellect 11, Personality 17, Endurance 9, Accuracy 17, Speed 9, and Luck 17.
Skills: Average Selection
Join Conditions: look for him at his home in Ravenshore. He’ll accept your offer to join the party, if your main hero is above level 4.

ClassRace: Male Champion
Level: 50
Stats: Might 47, Intellect 13, Personality 15, Endurance 30, Accuracy 21, Speed 27, and Luck 11.
Skills: 3 Expert, 1 Master, 5 Grandmaster
Join Conditions: After you bring him the Restoration Stone and heal him with it, he offers to join you. It is necessary to have him in your party to be promoted to the rank of Champion.

ClassRace: Female Dark Elf
Level: 50
Stats: Might 21, Intellect 27, Personality 15, Endurance 35, Accuracy 32, Speed 33, and Luck 23.
Skills: 2 Expert, 5 Master, 5 Grandmaster
Join Conditions: When you rescue her from her statuette prison, she joins your cause.

ClassRace: Male Necromancer
Level: 5
Stats: Might 9, Intellect 20, Personality 11, Endurance 11, Accuracy 15, Speed 16, and Luck 15.
Skills: Staff, Leather, Air, Earth, Fire, Water, Dark, etc.
Join Conditions: He is staying at the Adventurer’s Inn in Blood Drop, Dagger Wound Islands. He joins the party for free at the onset of the adventure – you just have to ask for his aid!

ClassRace: Male Cleric
Level: 15
Stats: Might 15, Intellect 15, Personality 22, Endurance 14, Accuracy 12, Speed 13, and Luck 13.
Skills: 7 Experts
Join Conditions: Whether you are helping the Necromancers or the Priests of the Sun you will have to seek him out in the Necromancer’s Guild.

ClassRace: Female Vampire
Level: 5
Stats: Might 20, Intellect 7, Personality 17, Endurance 17, Accuracy 16, Speed 19, and Luck 7.
Skills: Spirit, Mind, Vampire, Dagger, Leather, etc.
Join Conditions: She is staying at the Adventurer’s Inn in Blood Drop, Dagger Wound Islands. She joins the party for free at the onset of the adventure – you just have to ask for her aid.

ClassRace: Male Cleric
Level: 5
Stats: Might 13, Intellect 12, Personality 20, Endurance 13, Accuracy 11, Speed 14, and Luck 10.
Skills: Average Selection
Join Conditions: Joins you as part of the main quest at the start of the game.

ClassRace: Female Nosferatu
Level: 30
Stats: Might 24, Intellect 13, Personality 22, Endurance 19, Accuracy 19, Speed 27, and Luck 15.
Skills: 10 Expert, 1 Master
Join Conditions: After the Alliance quests have been completed, visit her in her home in Twillight, Shadowspire.

ClassRace: Male Necromancer
Level: 15
Stats: Might 15, Intellect 27, Personality 11, Endurance 17, Accuracy 15, Speed 17, and Luck 15.
Skills: 4 Experts, 3 Masters
Join Conditions: Joins your party if you ask for his aid in Shadowspire. Visit him very early in the game.

ClassRace: Male Troll
Level: 15
Stats: Might 30, Intellect 7, Personality 7, Endurance 24, Accuracy 20, Speed 18, and Luck 16.
Skills: Poor, but four of them are Expert skills
Join Conditions: You have to take this guy along. He’s a quest NPC. You can keep him though.

ClassRace: Male Minotaur
Level: 30
Stats: Might 30, Intellect 15, Personality 21, Endurance 18, Accuracy 21, Speed 25, and Luck 21.
Skills: 9 Expert, 1 Master
Join Conditions: This Minotaur offers to join your party after you have completed the Alliance quests. He can be found in Balthazar Lair.

ClassRace: Male Lich
Level: 50
Stats: Might 28, Intellect 30, Personality 28, Endurance 19, Accuracy 23, Speed 25, and Luck 18.
Skills: 5 Expert, 4 Master, 5 Grandmaster
Join Conditions: When your main character hits level 50 and you have completed the Lich promotion quest, he will join your group. He lives in Shadowspire.

Teachers are NPCs found in buildings that can upgrade your existing skills, after paying an amount of gold and reaching the required skill level (4 points for Expert, 7 for Master and 10 for Grand Master). Grand Master status can only be achieved once you promote your character, and to do that you must accomplish the promotion quest specific to your class. 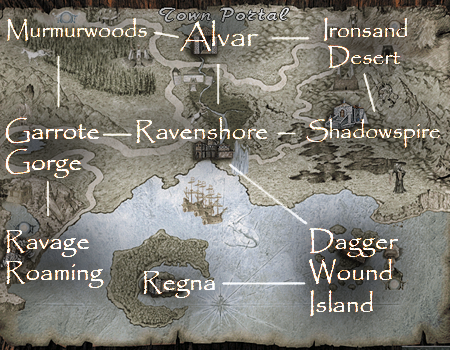 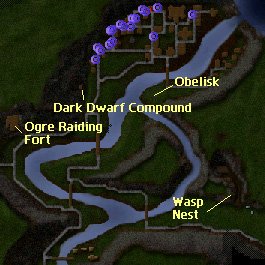 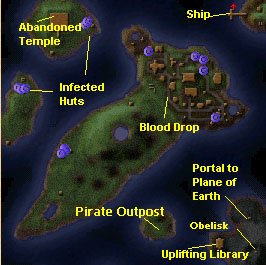 Population: Lizardmen
Locations of Interest: Abandoned Temple, Pirate Outpost, Plane of Earth, Uplifting Library
Training Hall: Up to level 5
Guilds: Normal Elemental Guild
Travel: Ship to Ravenshore every day
Quests: Message to Ravenshore, The Power Stone, The Anointed Potion, Missing Brother, Prophecies of the Snake, The Serpent Idol, Yellow Fever
Notes: You can travel to Regna from here only later in the game, when the pirates build their outpost. 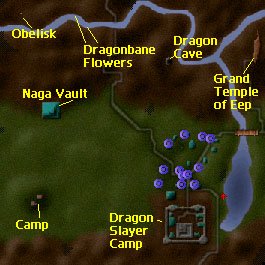 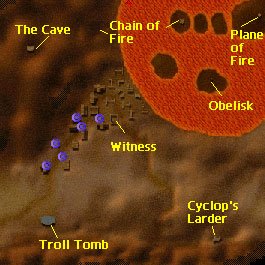 Population: Trolls
Locations of Interest: Chain of Fire, Cyclops Larder, Ilsingore’s Cave, Plane of Fire, Troll Tomb
Training Hall: None
Guilds: None
Travel: Coach: Alvar on Monday, Ravenshore on Thursday and Saturday, Shadowspire on Wednesday and Sunday
Quests: Putting a Soul to Rest, Troll Homeland, Protect the Trolls!
Note: If you chance around here at low level, just run to the Troll village to avoid those nasty projectiles. 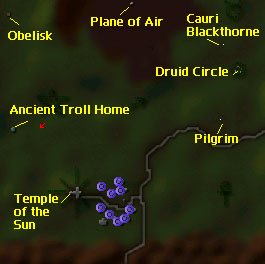 Population: Humans
Locations of Interest: Ancient Troll Home, Druid Circle, Plane of Air, Temple of the Sun
Training Hall: None
Guilds: Grandmaster Guild of Light
Travel: Only walking
Quests: The Skeletal Transformer, Priest Quest
Note: Murmurwoods is a really nasty place. Don’t even bother fighting the creatures unless you have a level 30 party with plenty of healing potions. Having the Fly spell helps. There also several unique teachers in this area, if you can reach the village. 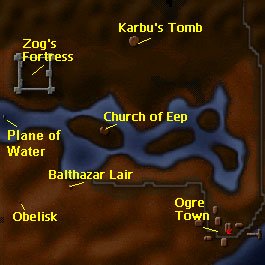 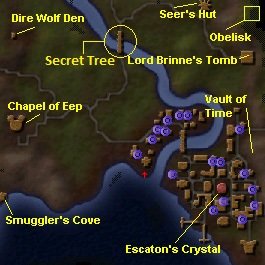 Population: Dark Elves
Locations of Interest: Chapel of Eep, Dire Wolf Den, Escaton’s Crystal, Smuggler’s Cove
Training Hall: Up to Level 15
Guilds: Expert Elemental Guild, Grandmaster Mystic Guild
Travel: Coach: Alvar on Monday and Saturday, Shadowspire on Thursday, Garrote Gorge and the Arena on Sunday. Ship: Dagger Wound Island on Tuesday and Thursday, Ravage Roaming on Monday and Friday, and Shadowspire on Wednesday.
Quests: Blackmail the Smugglers, Message to Alvar, Battleship Sunk!, Heartstone of Air, Heartstone of Earth, Heartstone of Fire, Heartstone of Water, What is Wrong With the Planes?, Arcomage Tournament, Dire Wolf Extermination, Eclipse, False Plans, Rescue the Daughter
Note: This is a great place to build up your experience. Heal at the church. Avoid those centaurs, focus on the wolves. Also – very important – there’s a secret willow tree near the bridge. If you click on it, you will find a unique weapon hidden inside to aid your adventure! 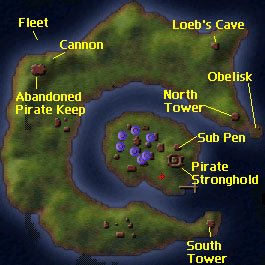 Population: Human Pirates
Locations of Interest: Abandoned Pirate Keep, Old Loeb’s Cave, Passage Under Regna, Pirate Stronghold
Training Hall: None
Guilds: None
Travel: Ship: Dagger Wound Island on Tuesday and Thursday, Ravenshore every day
Quests: None
Note: This place is tough, but you will find a lot of useful shops for all of your Level 50 needs. You can only get here from Daggerwound Islands late into the game as part of the main questline. 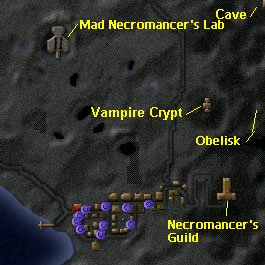 Population: Vampires, Necromancers and other Undead
Locations of Interest: Mad Necromancer’s Lab, Yaardrake’s Cave, Necromancer’s Guild, Vampire Crypt
Training Hall: No limit
Guilds: Grandmaster Dark Guild
Travel: Coach: Ironsand Desert on Tuesday and Saturday, Ravenshore on Monday and Wednesday, Garrote Gorge on Sunday. Ship: Ravenshore on Tuesday, Thursday and Saturday, Ravage Roaming on Monday
Quests: Necromancer’s Quest, Vampire Quest, Bone of Doom, The Puzzle Box, The Vial of Grave Earth
Note: Shadowspire should be the third area you clear up, after Ravenshore and Alvar, since the creatures here are easy pickings. Not the monsters north of town, however! You can also find some decent gear to buy around here.