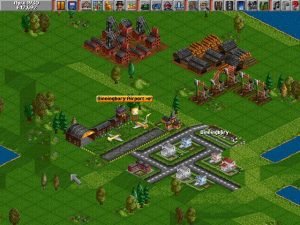 Take the gorgeous graphics of SimCity 2000 and combine them with the intricate economic model of Railroad Tycoon, and what do you get? Transport Tycoon, an instant classic. Though it clearly draws more than a little inspiration from SimCity and Railroad Tycoon, Transport Tycoon is very much its own strategy game. It picks up where those classic sims left off, creating a small world that evolves under the influence of your decisions. Unlike SimCity, however, you donâ€™t build the cities in Transport Tycoon, but the transportation networks.

Play begins in 1930, and your challenge is to link the cities of your world by building a transportation network that will not only help the world thrive, but also make you filthy rich. Itâ€™s no simple matter of connecting the dots, though, as topography will force you to work through, over, and around mountains and waterways to link towns. At the normal setting, youâ€™ll have 20 towns to work with — enough to keep you busy for weeks of gaming.

In the beginning, youâ€™ll only have access to a couple of locomotives and buses, and a single small airplane — plus a few hundred thousand dollars — with which to build your empire. That bankroll isnâ€™t a gift; itâ€™s a loan, so use your capital wisely. Start small — maybe a few bus routes — but keep your grand strategy in mind.

Naturally, time marches on as youâ€™re building your transportation empire. And so each move you make — especially early in your career — is a strategic decision that may have a profound impact on whether you end up in rags or riches. Will it be roads or rails to start? Should you borrow $50,000 to build that tunnel? Should you buy the exclusive rights to that new, untested locomotive? These decisions and a host of others challenge your strategic thinking at every turn. 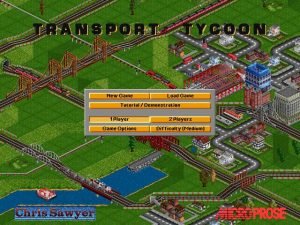 Your Tycoon rivals are pretty savvy, too. They might build some funny-looking roads at times, but on a strategic level, their decisions are usually sound. They go after the larger, more lucrative cities to establish themselves, then theyâ€™ll move into your turf to compete against your routes. Once, after careful study, I was set to click the mouse button to build a four-track railroad station, when — poof! — a competitor slapped a station down right in my path. The sight of a rivalâ€™s construction near one of your transportation centers is guaranteed to throw you into a panic.

As in Railroad Tycoon, linking industries and materials is the key to success. You have to be alert for opportunities to, say, transport iron ore from the mine to the steel mill, which produces the steel you can then haul to a nearby factory. There are forests, sawmills, oil wells, power plants, and farms — each with a demand to meet and a product to distribute. Industries come and go, and their production varies as well. Your cities grow, too, and their needs change constantly.

The three-quarter, SVGA overhead perspective is very effective, and quite detailed. You can watch construction sites, luxury homes, churches, and giant apartment buildings come and go as your city evolves. And as your transport systems grow, this virtual world comes to life before your eyes in stunning realism and detail. In fact, your world is so much fun to watch that itâ€™s easy to forget that you must constantly monitor your operations to remain profitable and stay ahead of the competition. The animation is incredible — from wrecks on the highway to plane crashes — and the sounds are as delicious as the sights.

The difficulty options let you tailor the world to your liking. You can set the number of competitors, the amount of water and different terrain elevations, the number of cities and industries, the head-start you have on your rivals, the occurrence of disasters, and even choose between a steady or a cyclical economy. Some of these options can be changed during the game, too. 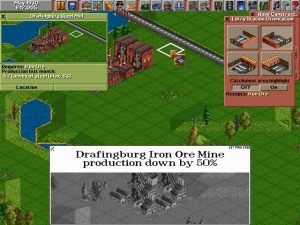 Transport Tycoon also boasts one of the friendliest and most flexible interfaces youâ€™ll find anywhere. You can call up a list of cities, then move to that location on the map with a click. Click on any plane in your empire, and a window pops up so you can watch it fly its route, or check its cargo, performance, age, and maintenance history. This game is so complex that the task of managing your empire can really become overwhelming, but itâ€™s hard to imagine a more efficient interface for the job.

There are some annoying inconsistencies, such as idiot train drivers who canâ€™t seem to find their way to a station, and planes that crash with annoying frequency. But forget those hassles; Transport Tycoon is a rare jewel, and one that fans of SimCity or any classic Tycoon-style sim should approach with gleeful interest. 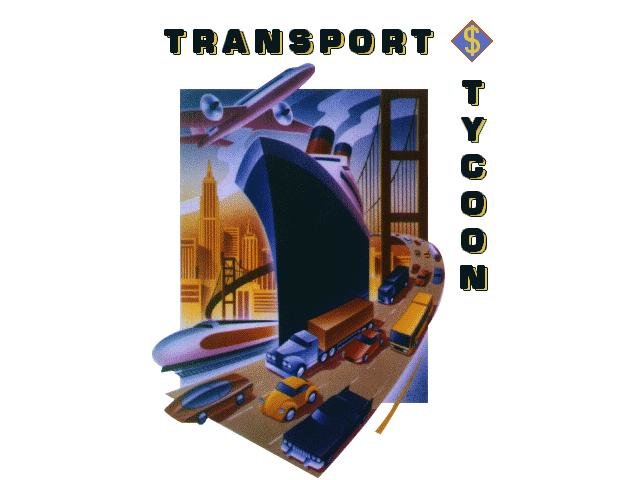