This is a quick guide on installing DOS games from virtual discs such as BIN, IMG, ISO, etc. This will hopefully help you out if you’re trying to play a DOS game off a CD image and get the common ‘please insert disc’ error message. 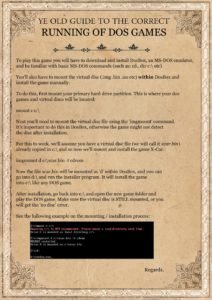 How to Mount CD Images in DosBox

How to Stop Skipping Sound / Music in DosBox

What are Magnet Links?