Back before Roller Coaster Tycoon rumbled onto hard drives everywhere, designer Chris Sawyer was fiddling with a follow-up to Transport Tycoon, his business and transportation sim, which had garnered a loyal following. When he had the revelation that train tracks bear a striking resemblance to amusement park rides, a new star was born and the sequel was quietly shelved, or so the story goes. Now, on the verge of the release of the third Roller Coaster Tycoon, the game that was that seriesâ€™ inspiration is itself back on track.

The graphics might be several years behind the times (it reminds one of Transport Tycoon), but the gameplay is pure Sawyer. Fifty percent of the time youâ€™re setting up connections and looking to see what you want to hook up next. The other fifty percent youâ€™re watching what youâ€™ve hooked up, to see it grow, and see where new industries might sprout up. Against up to seven AI opponents, or a mix of one human foe and the AI, you set up your transportation and trade networks and watch the money roll in. At the deepest level you can really dig into the stats. Or you can just build a track and watch the trains go back and forth.

The game places you as a fledgling business owner who wishes to make money ferrying people, goods or mail around town and between towns. You aren’t limited to trains but can operate a fleet of buses, ships and aeroplanes as well, all with their own operating costs, advantages and drawbacks. You go about purchasing vehicles, setting up routes and turning a profit until you can expand your transportation network. 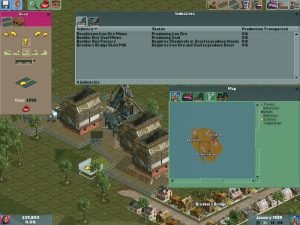 The isometric, sprite-based tile graphics of Locomotion make it a dated product, and while this technique is not necessarily a bad one it depends heavily on the quality and care with which the sprites are drawn. Locomotion isn’t bad in this regard but it does suffer from trying to be too detailed – as a result the buildings and other shapes lack distinction, especially at large map scales when they become a pixelated mess. Fortunately you won’t stay zoomed out for long, as the bulk of the game needs you to be zoomed in to lay tracks and roads.

The interface in which you resolve all of this is somewhat quirky. It’s consistent, but operates to a slightly different set of rules from other tycoon-style construction games. For one thing, Locomotion insists that you lay down a tile for every step of the way – no short cuts like using a dragged line to do a mass placement here. There is a ‘repeat last time’ click available which does cut down on the pain somewhat, but every step of the way necessitates at least one click per tile. Worse yet, there’s no undo option, so every poorly-aimed click means lost money as you have to demolish what you’ve placed.

It’s got it’s quirks and woes, and will likely only interest a subset of tycoon players. At the end, however, it’s much bigger than Transport Tycoon, with over 40 scenarios, huge maps, and literally hundreds of vehicles on screen at once. Plus the game spans multiple decades beginning in the 1920s and carrying you through the heyday of the railroad to modern mixed transportation and economic models. Itâ€™s not sexy, or flashy, but it does have that old Transport Tycoon charm.