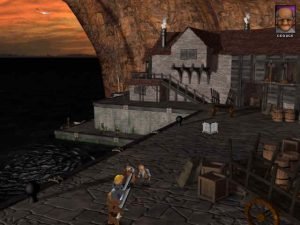 In the world of Jarrah, the evil magician Silver rules the land with terrible power, both martial and magical. With his twisted offspring, Fuge and Glass, he seeks the source of ultimate power. David is the typical headstrong young lad whose sense of honor and valor outweigh what little common sense he has. Yet once wronged by Silver, his determination (and the help of various friends) will give him a fighting chance to stop the evil sorcerer’s plans. It’s not the most unique fantasy game plot ever, but it’s a start, and it fits in nicely with the type of game Silver tends to resemble.

Silver has a cool presentation, bearing an incredible resemblance to Final Fantasy VII. The intro is cinematic. The background artwork is lush and inspiring. The voice actors are remarkably talented and must have enjoyed strong direction, as blemishes of tone and feel are relatively rare. The sweeping background music has just the right feel to it—an orchestral arrangement with the epic ambiance befitting the game, yet that never gets in the way. It all points to an adventure promising great scale.

But once the game gets rolling, it becomes quickly apparent that the gameplay isn’t quite what you might expect. Instead of taking turns trading blows in combat, all the fighting is real-time and very high on the action content. When wielding your sword, you have three different sweep attacks, as well as a swing, a lunge, a dodge, a block (if you have a shield) and various special attacks that you’ll learn along the way. Each one of these attacks requires that you hold the control key down, click on the mouse, and often slide your mouse a certain direction. It rather emulates the button and d-pad combinations in typical console fighting games.

To manage your characters, right click on the character you need, and a icon-based menu pops up. This lets you switch between different weapons, special attacks, potions, and inventory management while showing wear and tear on some things, how much time until certain powers recharge, or how much ammunition you have for a particular weapon. You can instruct your group to all fight one target or each take on a separate one, and when some characters are using spells or ranged weapons, you can tell them how many times they should fire before pausing. Once they empty their magic energy or ammunition reserves, you need to quickly click on them and change weapons to something more suitable. Since only one member can cast a certain spell at any given time, you might need to swap spell ownership as well. 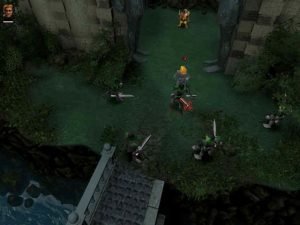 This fighting system has its ups and downs. On one hand, the turn-based fighting in many RPGs can feel dull and artificial. On the other hand, trying to get close enough to land your blows, connecting with your sword, feinting from attacks, and occasionally using a special attack successfully is very difficult. It’s even worse in some battles, where the camera is far away from the action and everything is so small you can barely make out which direction you’re facing. In addition, the computer does a pretty poor job of managing your other party members in a fight.

It’s even quite easy to accidentally drop members from your active group (at which point they become terminally stupid). This adds up to a system where you’ll always be fighting far below your true potential. It’s quite frustrating, to say the least, and it requires absolutely top-notch reflexes, mousing skills, and micromanagement. This easily makes the game unsuitable for many potential gamers. Add an annoying checkpoint-based save system and the game can be even more annoying.

Despite all the glamour and polish of Silver’s presentation, it’s an alarmingly buggy game. It crashed more than once on me when exploring certain areas. Crash bugs, gameplay bugs, a frustrating combat system and an even more annoying save game system put an awful dent on what could have been a very memorable Japanese RPG.