After playing RollerCoaster Tycoon for a few hours, you’ll find that the fun is wildly contagious. Unlike other strategy games, RollerCoaster Tycoon, perhaps more befitting its corporate master Hasbro than its actual publisher MicroProse, seems more concerned with surrounding the player in the fun parts of managing an amusement park. As a business simulator / park builder, it succeeds admirably.

As with Sawyer’s previous game Transport Tycoon, RollerCoaster Tycoon is not particularly challenging to win. You can blast through all of the pre-made scenarios without a lot of struggle. Most of their challenges are geographical in nature, as in how do you manage to squeeze another ride into your cramped little park? Unlike Bullfrog’s underachieving Theme Park, a game which RollerCoaster Tycoon can’t help but be compared with, it never forces the player to get bogged down in the minutia of running a park. And while you can design your own rides, the supplied ones are more than adequate (and somewhat less frustrating to use due to the slightly clumsy interface of the ride builder).

Although building the perfect coaster is where you’ll eventually spend the majority of your gaming time, you also have do much more to win. This isn’t just about building rollercoasters, but managing the less glorious minutia of running a fun park – all of which the game manages to integrate. You’ll need to manage foot traffic by creating paths to and from your various rides, balance thrill rides with more casual attractions (Ferris wheels and such), set pricing, and hire mechanics, handymen and security guards. The game is divided into scenarios. Only a few are available in the beginning, but once they’re completed, you get access to the rest. Presentation wise, the sound effects are superb, with giggles and screams, annoying carousel music, and the clanking of coasters. Visually, RollerCoaster Tycoon is nice and sharp. The ridiculous cartoony graphics do a superb job at conveying a lot of information in a typical windows format. Beautiful details abound on a micro level. Little people run around the park all giddy after getting off a very fun ride, and others stumble and fumble their way around, their faces green with the sickness brought by riding a rollercoaster.

Overall, RollerCoaster Tycoon is the most purely entertaining strategy game in ages, one that’s virtually guaranteed to put a smile on the face of even the most jaded gamer. It’s a wildly exuberant game that reminds us that fun is an honorable goal for any entertainment medium, even one as “serious” as a strategy game. 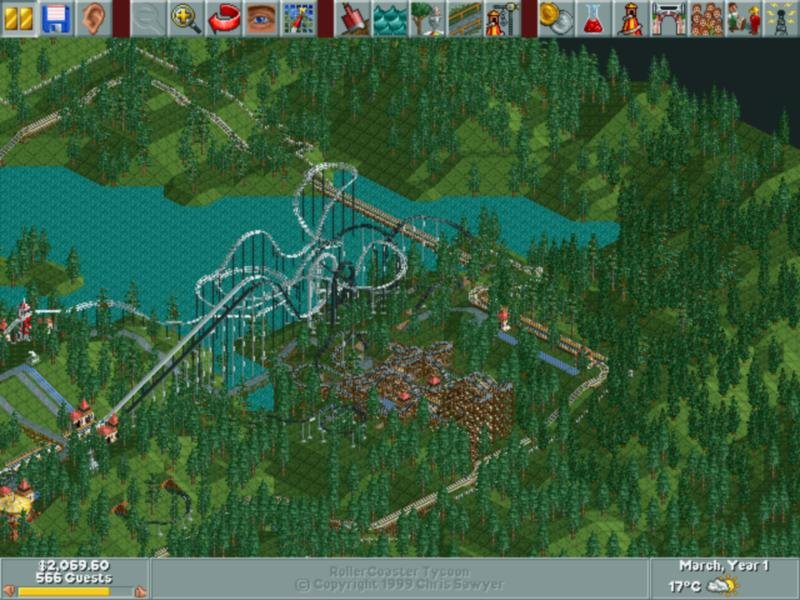