Simply put, Throne of Darkness is Diablo soaked in Oriental spice and marketed towards the less picky twitch gamer. Itâ€™s tempting to write it off as pure fluff, with its unrelenting array of enemies, somewhat thin storyline, and familiar isometric view. But if you stick with it long enough, youâ€™ll discover an action role-playing experience that I dare say gets a surprising amount of things right. Find out what in this review.

Kira Tsunayoshi, a sybaritic despot whoâ€™s traded his soul for almost unimaginable power, is the main Diablo-esque antagonist in Throne of Darkness, sans the horns and sulfurous stench. Kira and his guards guzzle a brew that transforms them into zombie-like beings with an unquenchable taste for blood, and he launches a campaign of annihilation against his four trusted lieutenants.

After mucking through a few battles to clear out your citadel, youâ€™ll soon add a priest and a blacksmith to your party â€” and this is where Throne starts to get really fun. The game makes you work for it, though. The manual is unclear on how you should use these guys, and it takes a lot of wandering to accumulate special items â€” precious gems, magical cases, and more â€” that are coupled with run-of-the-mill swords, spears, shuriken, helmets, and other gear to churn out powerful super-items.

Add in a well-rounded character-advancement system and some seriously hard battles (getting up the southeast slope to the last citadel is a brutal slog), and itâ€™s easy to see how Throne might have a lock as The Next Diablo. But itâ€™s compromised by a disappointing problem. This party of four (drawn from a total of seven warriors) is prone to some very stupid behavior.

You directly control only one warrior â€” the others are guided by AI routines supposedly determined by battle formations setting their attitude and choice of attack. Even when you choose â€œdefensiveâ€ behavior, though, these guys display out-and-out death wishes, heading off at the slightest provocation to tangle with much superior enemies and frequently dying outside your field of view. Another questionable decision is a single save-game slot, which has serious repercussions when it comes to armor and weapons (if you donâ€™t save before each customizing session, a weapon might improve so much that the warrior isnâ€™t strong enough to carry it), not to mention inadvertently saving in a situation when death is essentially unavoidable.

Given its slow and clumsy start, one may be tempted to give up on Throne of Darkness early on. But with enough time, perseverance and patience, one can eventually find enough entertainment in the game to keep comming back for more. And in my book, that’s the mark of a game that does more things right than wrong. 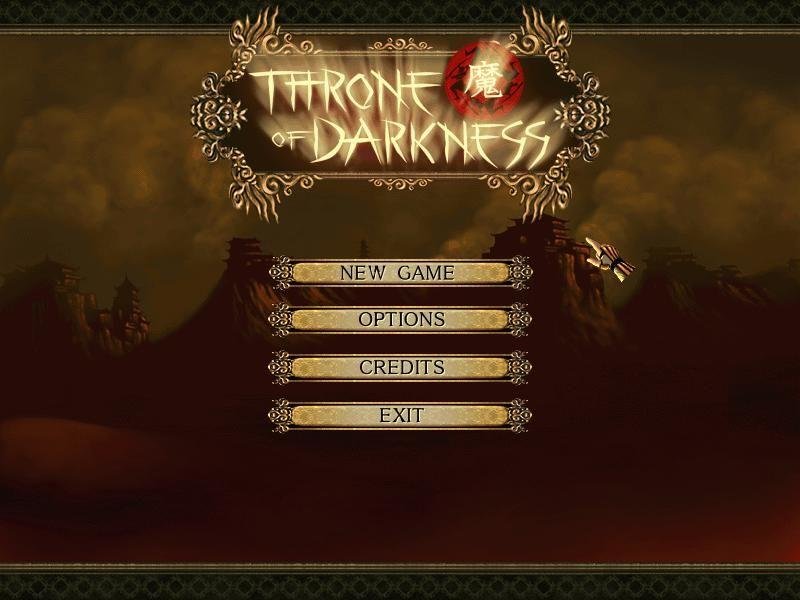