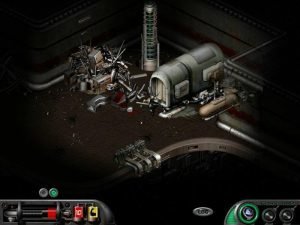 Dungeon crawling blasts off into space.

In as few words as possible, Harbinger is Diablo in space. With only a partial understanding of what made Diablo good, it transposes the action role-playing genre into the science fiction realm. Actually, it’s not really outer space so much as a spaceship that seems to have been built from a bunch of metal-walled dungeons. You know it’s a spaceship because you get missions sending you to a different part of the “ship,” which is a matter of going to the next level.

The pre-built locations have the haphazard look of random levels but none of the replayability offered by the big D. The developers have hand-placed absolutely everything, robbing Harbinger of any sense of exploration or freedom. There is only the option to go back to town between levels to sell stuff, with “Town,” in this case, being a room with two aliens behind desks. Between them is a teleportation circle called an umbilical, which is aptly named considering the tethered narrative.

Although the three character classes play differently, leveling them up is so simplified that it takes a backseat to managing their inventories. You spend a lot of time arranging stuff in your grid, Tetris style, so you can carry as much as possible when you go back to those aliens behind their desks. After all, you’re going to be selling most of the stuff you find. Treasure is limited to a particular class, and since you’re only playing one of the three classes at a time, you can’t use two-thirds of the things you find. So instead of replay value, Harbinger instills you with a lingering doubt that maybe you should have chosen one of the other characters. If this is enough to get you to play a middling action RPG over again, consider your gaming time well spent.