It’s hard to fully appreciate how terrible the film version of Catwoman really was. The only conceivable benefit derived from its awfulness was that it served as indirect comedy, or a nice way to list everything that should not happen in an action movie. It’s only fitting, then, that such a terrible movie would have an equally sucky gaming counterpart to call its own. 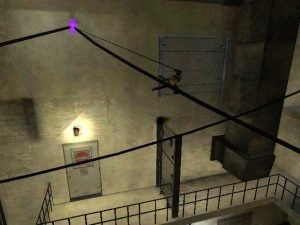 Just as some books weren’t meant to be read, Catwoman doesn’t seem designed to be played. At the very least it’s not designed to amuse, as it exists only to help sell tickets for a cinematic bomb that itself was banged out overnight to cash in on the comic book movie craze. The game radiates such aggressive indifference, it’s hard to picture a single person who worked on this game enjoying themselves, with the possible exception of Oscar winner Halle Berry, whose voiceover work here consists exclusively of neutered innuendo and cringy feline puns.

Catwoman herself, whose powers in this fast-and-loose retelling were supposedly acquired by the revivifying kiss of a conveniently local, conveniently helpful Egyptian cat, is well modeled and physically resembles Berry, but the designers make the fatal assumption that we’d rather gawk at Catwoman nonstop than play as her for any length of time. In the end, it’s quite faithful to the movie in that it also sucks big time.