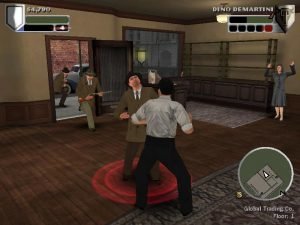 The Godfather tasks you with facing a variety of action-packed missions in a fully living New York City—from mob hits and bank heists to drive-by shootings and extortion in your play to become the next, and most powerful, Don. You begin as a small-time thug doing missions for the Corleone family to earn respect, which is the game’s measure for how well you’re doing. As you rise through the ranks of the underworld, you interact with characters from the film. It’s not a recreation of the movie, but rather a “GTA meets Don Corleone” sandbox kind of game.

Fans of the flick, though, will be able to shut off the inner commentary constantly saying, “Gee, this is just like that time when Tommy Vercetti….” The plot here evokes both the movie and Mario Puzo’s novel through the combination of a great script, key figures like James Caan and Robert Duvall reprising their movie roles, and the perpetual use of Nino Rota’s celebrated score. You could easily say that this tale is superior to The Godfather III and The Godfather Returns novel, although this may not be saying much where the latter is concerned.

As an up-and-coming button man for Don Vito Corleone in 1940s New York, you take part in all of the movie’s biggest scenes. Everything you do is just off-camera, so instead of interfering with the movie story, you fill in the blanks. When Luca Brasi gets whacked, you’re seeing it all through a window and have to kill the assassins. In the aftermath of the orange-stand assassination attempt, you drive Fredo and his pop to the hospital. Hell, you even acquire the infamous horse’s head used to convince movie mogul Jack Woltz that he’d better play ball.

Unfortunately, the story missions are brief. There are a couple dozen assignments linked to the movie, including training levels, and most are simplistic variations on GTA archetypes. You shoot people, steal cars, drive like a lunatic, watch your wanted level — surely you know the drill by now. Aside from the absence of Pay ’n’ Sprays (there was apparently no way to ditch the law with quickie paintjobs in the 1940s), everything is right where Rockstar left it. 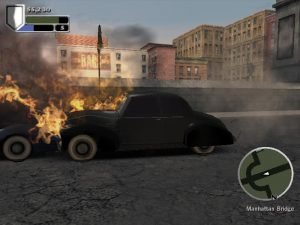 But The Godfather is totally lacking in GTA’s trademark sense of humor and flair. There are no goofy escapades, like selling drugs from an ice-cream truck or flying an RC plane to drop plastic explosives. Everything is strictly workmanlike, with linear objectives like sneaking past cops, clearing out hallways full of thugs, and evading the cops while driving from point A to point B. You can’t even really personalize your mobster, as there are just five skill stats to be buffed and a limited selection of outfits with which to play the dapper don.

Side missions add little to the experience. While you have the freedom to slip out of the main story and mess around in a lifelike (if awfully dark and dingy) WWII-era New York, everything is tedious. Beating protection money out of shopkeepers, buying money-earning backroom rackets like casinos and whorehouses, and pulling hits are actions beleaguered by repetition. You extort the same bakeries and gambling dens and whack nearly identical out-of-favor wiseguys again and again. Only those who want to crank their completion percentages into the 90s to become don of New York will bother playing too much takeover or Murder, Inc. (Oddly, this ultimate objective kicks in almost arbitrarily at that point and has nothing to do with the story missions.) 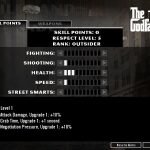 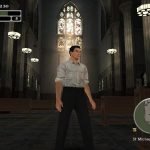 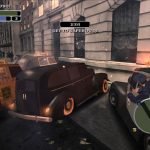 Moreover, although committing extortion and running rackets has a mob feel that would make Sonny Corleone proud, it is often absurdly difficult to pull off. Businesses under the protection of the rival mob families (Tattaglia, Barzini, Cuneo, and Stracci) are guarded like miniature Fort Knoxes. Try to squeeze some cash out of a penny-ante booze can and you typically have to take out a half-dozen or more heavily armed goons who kill with a couple of shotgun blasts. And the camera switches to a tight, over-the-shoulder angle whenever you draw a weapon, making it tough to keep an eye on baddies or even to move competently around corners.

If you’re a Corleone champion, or even a GTA goon desperate for Rockstar to get going on that sequel to San Andreas, The Godfather is an acceptable way to while away a few dozen hours of your mortal existence. Unsophisticated mission design and racketeering repetition make it less ideal for non-fans, however.