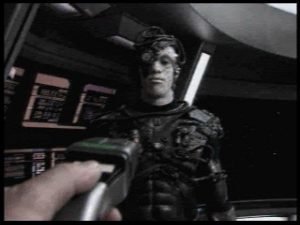 There have been a lot of Star Trek games thrown around. A few were good, most were average. Star Trek: Borg is different from past attempts since it’s an interactive movie as opposed to an all-out game. If you’ve played any FMV games before then you probably already know the logic behind it. It’s an industry that rode on the high capacity of CD-ROM discs, dazzling people with something they’ve never seen before – movies on their computer. But the novelty quickly ran out, and by the end of it you weren’t watching a really good movie or playing a good game.

In Star Trek: Borg you play the role of Cadet Furlong. Ten years ago your father was killed on the U.S.S. Righteous by a Borg attack. Q (an omnipotent being) has offered to send you back in time to prevent your father’s death from ever occurring. Once you’re flung into the past, you’ll be deciding the fate of your father and the entire crew. Any mistakes you make could end the game or change the outcome. All you have is a tricorder and your own mind to help you avoid the disasters ahead.

The first thing that’ll grab your attention is that the video in the movie is full screen. This has been done before in other products, but the quality is pretty good when compared to previous attempts. You’ll be pleased to know that John de Lancie reprises his role as Q in this game. He plays such a great role that if it weren’t for his acting, this game wouldn’t be half as good as it is. You’ll find yourself laughing at his many snide remarks and antics. There aren’t any other actors from the Star Trek universe in the game (with the exception of the Borg). The game is very easy to play. As the video plays, an icon on the screen will appear at certain points. At these points you can make a choice as to what you want to do. You’ll also be able to pause the video at any point to analyze objects and people with your tricorder. Anything you click on with your tricorder will yield a plethora of information. There’s so much information in this game that I doubt anyone will ever read it all. The entire game unfolds as a video. It’s pretty much non-stop action until you screw something up. At that point, Q will appear to mock you and you restart. You can do this indefinitely.

The biggest problem with games of this type is the replay value. Once you’ve played through the entire interactive movie, there’s little incentive to go through it again. Even though the game touts 120 minutes of interactive video, don’t be fooled into thinking that’s how long it takes to beat the game. You have to remember that all your screw-ups are videos, as are the introduction and ending. Once you know what to do in each situation, it’s just a matter of minutes before you can walk through the entire game. Even though you’d like to think you’re making all the decisions, in reality you only control key points in the movie.