You almost have to wonder why anyone would bother producing a sequel – 10 years after the fact, no less – to something as culturally significant as DOOM. You’re almost doomed from the start, pun only slightly intended. In 1993, it was revolutionary. One decade of continuous technological advancements later and it feels like it’s taking on its own legacy. Here’s a tomb you wouldn’t want to raid.

The expectations were off the charts in 2004, mind you, and if you’re unable to replicate the impact of the original, it’s a surefire disappointment. If you stay too close to the original gameplay, you’re a retro throwback. But if you take it too far in entirely new directions, you risk alienating your existing fans and making it feel less like a sequel than some sort of branding exercise. So for those out there who, out of spite or out of suspicion, chose to stay away from DOOM 3 when it was hot, the question now stands – was it ever worth playing? Should you bother picking this game up today?

The answer is a most resounding YES! Even as someone who originally played DOOM to death, I still found this third installment entertaining despite its sanctimonious dismantling of everything ‘DOOM’ stood for – it’s a complete remake from top to bottom, and the resulting journey to Hell and back is indeed curious. The game shares many superficial elements with the original – lots of the same bad guys and weapons, the general lone ranger storyline – but while you still end up shooting hellspawn just to stay alive, the intervening decade of evolving gameplay has definitely left its mark.

It replaces the pure adrenaline-fueled intense action of the originals with a slower-paced, story-based survival horror shooter like Undying or Resident Evil. The resulting game is, like the original, a technological tour-de-force. And id retains its ability to make a game feel as solid as granite. Several spectacular early technological feats were rearing their heads into computer games at around this time, including normal mapping (similar to bump mapping), specular highlights (lights bouncing back from shiny surfaces), and real-time shadows, all making the game look extremely photorealistic. Despite all of this technology and some amazing gameplay set pieces, its overall design is all over the place, feeling like a combination of elements from previous games.

DOOM 3 is essentially a single-player game. Multiplayer is very perfunctory, if entertaining in a retro sort of way, though the omission of co-op is a serious disappointment, considering the original pioneered that style of play. The plot is very much Half-Life for the first twenty or so minutes, sans the compulsory tram ride (you do get one of those in a later level, though).

You’re a nameless space marine sent to a research colony on Mars to investigate some strange events. A portal opens, denizens of Hell show up, people turn into zombies, blood and human entrails get spray-painted on the walls, and you suddenly find yourself in the most absurdly over-fortified base in history. The arsenal is nearly identical to the original, from the shotgun, to the BFG-9000 or the chainsaw. The gameplay is slightly more elaborate than “find the red keycard to open the red door”; in the case of DOOM 3, you get to click a button on a monitor to open the door. That’s 10 years of progress right there. (That’s a cheap shot–letting you click on screens and touchpads is a welcome bit of additional interaction, and a terrific feature.)

The Sum of its Parts I’m sorry, was I interrupting something?
Uhh… okay, I’ll just leave then.

DOOM 3 borrows a lot of elements from Half-Life and the System Shock games. It lifts the whole opening narrative device from Half-Life, exploring the environment without combat before things literally go to Hell. Though it provides a nice before/after contrast for the player, it’s less effective this time out. First off, the player only observes the cataclysm that starts the demon infestation from a distance, whereas Half-Life made it feel like it was happening right in front of you. But more importantly, your first pass through the opening level looks pretty much the same as the second one. Had it opened with bright, well-lit levels, it might have ratcheted-up the tension.

It also borrows a lot of the sense that there’s stuff happening just outside your immediate area. You see glimpses of things happening through windows, and you can never seem to be in the same room as those people. One scene has a marine call in on your one-way radio begging for help, even giving his exact location, but you never find the guy no matter how hard you look. It’s a terrific device that makes the player feel like a participant as well as the center of the universe.

DOOM 3 delivers a lot of backstory through various logs strewn about the base, a feature used to great effect in the System Shock games. Some are pretty funny – one explains that they ordered jackhammers but instead got useless chainsaws – while others tell you useful information, like access codes for storage lockers. While they’re all competently written, none give you a sense of personality for any character, making this supposed tragic event very much a non-event. And unlike System Shock, they also fail to deliver a sense of progression through the story, as both early and later logs talk about “weird goings on.” They do little to enhance the drama; instead, they just deliver information in a very programmer-like manner. 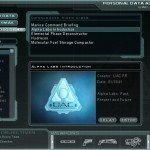 That Castle Wolfenstein feel completes the picture. Hey, no copyright obligations either! You can interact with computer terminals.

The Banality of Evil

But after you’re over the initial rush, what starts out as a tense exercise of skulking around corners waiting for the next strike eventually becomes formulaic. It feels like every encounter plays out with some slight variation of the same basic setup: lights flicker, whispers are heard or an evil laugh erupts, and hellspawn are beamed straight into your immediate facility, eager to burn, claw or chomp you. Both the scenery and action become repetitive, but the game is effective in throwing a few basic puzzles your way, like manipulating a crane, some annoying platforming bits or a new monster or weapon every now and then. But overall, there’s not a whole lot of variety, and the scares themselves fall flat at times as they become ever more predictable. It never really toys with the player by, say, turning a room dark and having nothing happen, or for turning on the “something bad is about to happen” sound effects and have nothing happen. 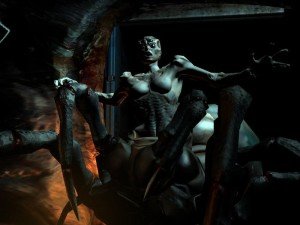 There are some moments where DOOM 3 manages a legitimately creepy atmosphere – an early spot where you shine a flashlight in a mirror and get a strange vision, to use one simple example (though why this happens is never explained). John Carmack’s brilliant 3D engine does all sorts of cool things with light and shadow. You occasionally see a spark of something amazing, like a moving shadow, making you think an attack is imminent when it’s actually something hanging from the ceiling, or the sight of the shadow of an Imp crawling along the exterior of the base.

A lot of these omissions give indications that id can’t quite decide if it’s created an over-the-top arcade blast-a-thon like the original, or some sort of realistic horror game. It dips its horned toe in the waters of both but ends up with a game floating around in no man’s land. The original DOOM was very game-y like this because it wasn’t trying to replicate a believable environment. It had secret areas that required you to do weird things to gain access, and you even got a summary at the end of each level. Painkiller follows this design perfectly.

But even as the schizophrenic survival horror shooter that it is, the value here is still excellent. The gameplay is great most of the time, the graphics are great and the sound effects are superbly effective in establishing mood. In the end, if you want the excitement of a slow-paced but hard-punching first-person shooter tentatively imbued in survival horror elements, then you can’t go wrong with DOOM 3. It gets more than a little predictable before the halfway mark, true, but entertained you most definitely will if you enjoy all this demon-blasting stuff.