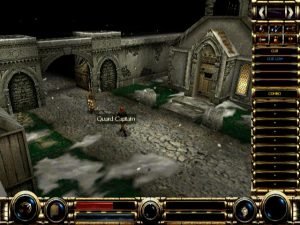 Amidst a wave of big name RPGs such as Vampire: The Masquerade, Icewind Dale and Diablo II, a few lower profile games made their appearance. Soulbringer is one of them, and despite (or even because of) its complete lack of similarity to the aforementioned action-RPGs, it must compete very hard for attention. The plot in Soulbringer – an awakened evil threatening the peace-loving realm – is your standard high-fantasy claptrap. The presentation is flat, though it has enough steam to guide you through the inevitable good vs evil final showdown.

Luckily, the fun of character development generally overcomes the game’s narrative weakness. Rather than choosing a class, you shape your character by distributing six points per level amongst the five stats (strength, speed, combat, health and magic), up to a maximum of 41 levels. All stats are important in Soulbringer, and it is easy to see how they affect your abilities when they increase. Typically, most characters will become warrior-mages, specializing in combat and using spells to complement their abilities. You might want to play through the game a second time before playing a mage character, as there is neither any mana regeneration nor a way to rest. Potions are the only stable way to refill your mana, and they can be quite expensive.

Alongside the statistical increases in Soulbringer is a steady income of new weapons and armor. Magical weapons are rare, and most standard weapons offer a significant improvement when you first find them. There are plenty of trinkets and things to find, but shops are poorly stocked after the start of the game. But once you get into the thick of it, the items will come. As with any solid role-playing game, Soulbringer has both impressive combat and itemization. Weapons have different attacks, varying from thrusts and lunges to overhead smashes. Damage comes in three flavors-piercing, slashing, and crushing, and the weapon’s damage type often defines the attacks available. In order to access a weapon’s higher level attacks, you must have sufficient combat skill. 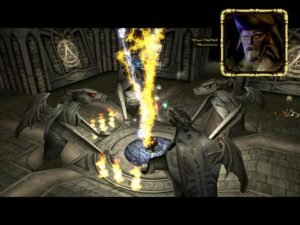 First level attacks tend to be worthless, so increasing your skills has a major effect. Piercing and crushing damage tend to dominate, as piercing bypasses armor and crushing is used on creatures resistant to piercing. Slashing tends to get the short end of the stick, although it can be useful on occasion. Some weapons offer both piercing and slashing attacks, so increasing your combat to gain those piercing attacks is always important. Weapon variety is also present – halberds, war hammers – Soulbringer has ’em all in spades.

Some control limitations aside (you can’t reconfigure the default keys), combat is still usually a thoroughly enjoyable event. There are a handful of annoyances, however. First, you don’t truly control your movement when attacking and the AI doesn’t seem to calculate distances properly. It’s not uncommon to give the attack command and watch as you approach an unmoving or frozen target and begin to repeatedly attack and miss because it didn’t move close enough.

A few other interface quirks harm the overall product and dampen the fun in Soulbringer, and it’s annoying since they could have easily been fixed. Some convenience options would surely be beneficial, but alas, several basic functions are nowhere to be seen – automaps and customizable controls, in this case, Exploration becomes tedious without the automap, as it becomes necessary to “lawnmower” (move straight up/down) areas to make sure you don’t miss anything. Different areas are visually distinct, but it is difficult to keep track of where you are within a single area, as every screen within the area looks pretty much the same. Also, the compass is another inconvenience, as it does not function perfectly. Finally, the journal lacks necessary details, such as specifics about where to go for a quest. 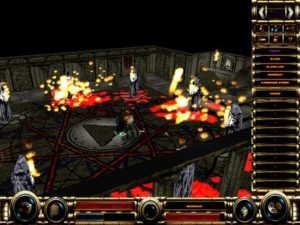 Most importantly, the navigation scheme is incredibly annoying. The core of the problem is the inability to transition smoothly from standing to running. Stuttering movement is a constant impediment and poor pathfinding intensifies the problem. In fact, it is by no means an exaggeration to say that you’ll waste several hours as the small movement hiccups compound. These consistently annoying control and interface issues leave a visible dent in an otherwise promising game. But as far as the underdog goes, Soulbringer is an interesting picking, if still flawed.