If anything, Nox proves that frantic simplicity is a good thing.

Don’t call Westwood’s action RPG a Diablo clone. Although fundamentally wired as an all-out action experience with some simple roleplaying flourishings, Nox is not Diablo. Nor does it have to be, as this frantically simple action game has everything it needs to stand tall on its own. 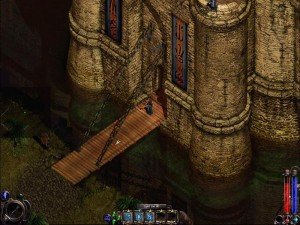 Behold, our majestic murky moat!
Oh yeah, and the castle.

You, as Jack the Warrior, Jack the Conjurer or Jack the Wizard, travel through numerous handcrafted levels, fighting monsters and keeping on the trail of Hecubah (the game’s villain slash dominatrix) while completing the optional side-quest here and there. Your character is only really as defined by his class abilities, as statistics here are very basic. Stats are Health, Strength, Speed and Mana. Even if you never realize that you can click on the character portrait to view them, it makes no difference at all. Abilities are raised automatically as you level up. This is clearly not a game built for those seeking a deep character-building RPG rich in statistics.

OK, so far, not so good, right? When you look past the lack of role-playing depth, however, you’ll find a game that is marvelously addictive—one that you find yourself returning to “just because.” The gameplay is fast, frantic and accompanied with pretty sparks of magic as battles heat up. The sound and music are excellent. The quirky characters have little to say but are charming nonetheless, and the artistic design is nothing short of extraordinary.

Given the game’s rudimentary character development, is it even worth checking out each class? YES! Not only will each single character present a different challenge by switching combat styles, they’ll also have a direct impact on the areas you’ll visit.

Wizards begin their adventure as an apprentice to a mage, Warriors must pass a life-and-death gauntlet while Conjurers must learn how to charm wild beasts to do their bidding and Wizards must prove themselves to an eccentric warlock. Each storyline diverges significantly before meeting up in key points to keep the central storyline in check, then they branch off again and so on. In the end, it’s well worth playing as each character to really come to grips with the size and diversity of the game world.

And don’t forget about the sizable multiplayer offering after wrapping up the solo campaigns. It can get downright frantic, and the character combinations allow for so many more interesting possibilities than in the “who gets the big gun first” mode of gaming. 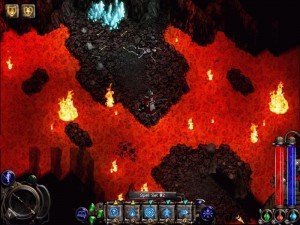 The game types are Capture the Flag, Arena (basic deathmatch), Elimination (final survivor deathmatch), King of the Realm (find the crown and keep it. You only get points for kills while you or a teammate is in possession of the crown) and Orb (each team guards a team flag, but only one orb is in play; you score by hitting the enemy’s flag with the orb, or gain the orb by hitting its carrier and knocking it free). While the single-player game tosses you into the fray as a lowly level-one novice, you begin multiplayer at level 10 with all spells available. Items and armor appear randomly and get respawned.

Serious role-playing fans will not find story and substance here, but Nox is greater than the sum of its parts. It’s silly and vapid and mesmerizing and addictive and a must for anyone who wants a quick session of isometric twitch gaming.