To its credit, Nightstone has a few fleeting moments of joy, however sparse and oh so fleeting. On the whole, however, it’s much too generic and awkwardly pieced together to warrant the average player’s attention. In one heart-pounding level you kill magic rocks.

Although officially released in 2001 by New Horizon Studios, the visuals, sound and game design better resemble something yanked out of the mid 90s. Normally this wouldn’t be a problem for retro throwbacks, but the inexcusably amateurish interface and gameplay are so disastrously outdated that even the first Diablo easily beats Nightstone hands-down. It would have been a great ’96 game, but when competing against such heavyweights as Dungeon Siege and Vampire: Redemption, the thing just can’t seriously stay in the race.

Something Awful This Way Comes

The only meaningful twist in Nightstone is that you play as all three character classes in one run, at first in turns but then as a party – included are the stereotypical warrior, amazon and mage classes – advancing through a large campaign map in a quest to oust evil. Said characters start on opposite ends of the map and must advance inward, conquering region by region. While this sounds like it could lend to some thoughtful Total War style strategy, it’s really just a level-by-level hopping exercise that sometimes branches off but usually stays linear. Characters can hook up and the party system is tolerable, but not that special overall.

Stats and itemization offer absolutely nothing new over Diablo, and what little innovation there is via inventory management is more annoying than interesting. The selection of items is poor, and gear is needlessly divided into ‘heavy’ (weapons, armor) and ‘small’ (potions, scrolls) objects. Character building is just as simplistic, with awkward stats to boot – ‘Strength’ is crystal clear for any ARPG fan, but can you guess what ‘Power’ is for, or ‘Skill’? What about ‘Resistance’? The on-screen interface and the controls fare no better. Dropped items aren’t highlighted or outlined when cursored, so you must constantly scan the landscape for loot obscured by the environment. Combat is a simple point and click affair with one or two extra cosmetics – the ability to block attacks with your shield, for example, or a ‘sneak’ ability that all characters can use. Too bad you don’t get XP by sneaking your way through levels. Yet one final nail in the coffin is a lack of a saving ability, meaning you must restart an entire level when you get mobbed by monsters and die. Uhm… yay?

Scratch that initial spark of optimism I had before – just avoid this game and stick to Diablo. As far as gameplay it offers literally nothing compelling or interesting to justify you spending your time over it. 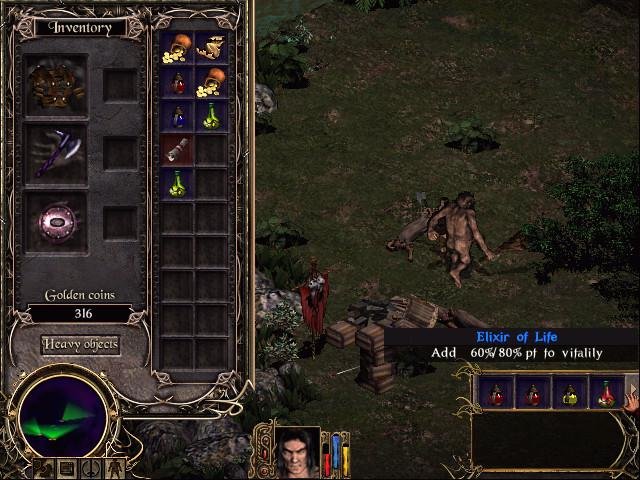