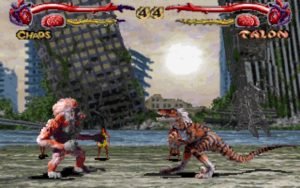 You get your own tribal worshipers to enslave and eat. Hidden games like volleyball, bowling, and skydiving cows will keep you occupied between the brutal action. Just like the arcade version of the same game, you can choose 1 or 2 player modes, and select from seven creatures to fight battle with in their home territory. Check out the training mode to practice the game’s various bone-crushing moves and dino fighting tactics.

There are various options to manipulate gameplay like setting the credits for deaths, handicaps for training purposes, bout time, and the number of rounds to fight. Difficulty is by far the most useful variable. This lets you adjust the aggressiveness of your opponent. Too high, and the creatures become immensely devastating. The violence also allows you to select the super blood, eating people, and fatality mode you most desire. This arcade mega game displays each dino’s name, life blood bar (diminishes as you take on damage), brain stem (indicates the strength of your dino’s brain), and various other on screen functions.

There’s even a hit combo display – dinos can inflict heavier damage on their opponents with multiple hit combos immediately diminishing the brain stem bar and sending the opposing dino into a short coma, making him appear dazed and vulnerable (but not beaten). This is when you pounce on him and unleash that primal rage! 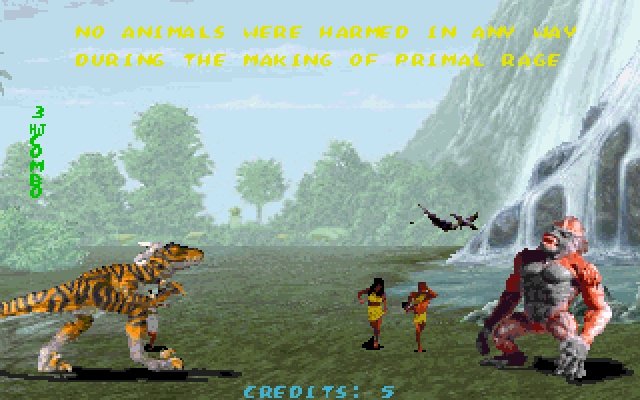 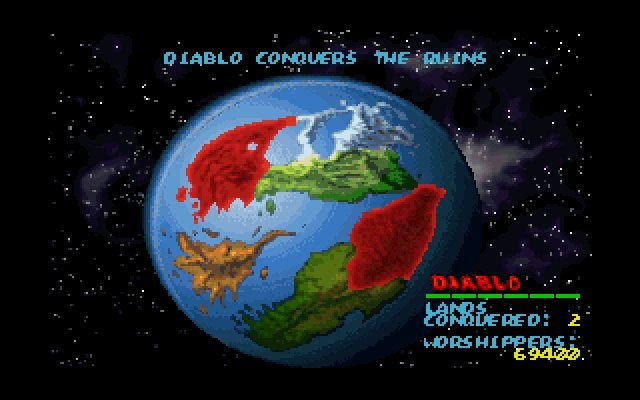