This Glock is essential for stealthy takedowns.

Like a lot of spy game protagonists, David Jones, the hero of the IGI series, is a gruff, down and dirty version of James Bond. Heâ€™s British, ex-SAS, and even has a sassy, sexy blonde intel officer at his side. But donâ€™t expect any social engagements, sleek cars, or suave espionage in this game. Jones is the secret weapon of the international anti-terrorism group, IGI, and he’s the guy to call when Bond wouldn’t make an ideal hatchet man.

The original Project IGI: I’m Going In was a sharp looking game that found itself muddled by AI flaws, no multiplayer, and an insane lack of in-mission saves. The sequel only moderately manages to fix these pressing issues. Locations are familiar, with a mix of locales that range from Libya and China to old military bases deep in Russia, once again rendered as huge outdoor levels. Around here Jones scoops out intelligence, rescues a gun runner, marks SAM sites for a bombing run, and just generally tries to get out with his life in a search for more tangled terrorist plans.

The level design integrates right into stealth gameplay, which is either a draw or a deterrent depending on your preferences. The sneaking elements, however, are only moderately fun when they work, but the actual level design makes the locations feel less like volatile real-world hot beds and more like puzzle-based training simulations. Itâ€™s a logic puzzle with headshots. The only problem is that the saving aspect has been implemented only half-heartedly – with only 3 saves per level, and with no scalable difficulties, there’s still a good deal of frustration to go around.

Enemies are smarter than before but still noticeably dumb. There are still plenty of opportunities to snipe one guard while nearby enemies remain completely oblivious. Still, itâ€™s certainly no worse than most of the competition by this time, and thereâ€™s no shortage of bad guys to avoid, or terminate. By any stretch, this is an exaggeratedly difficult infiltration game, and one that might annoy most casual players. I should have never gone covert ops zip-lining.

IGI 2 actually includes a multiplayer this time, and it’s good enough despite being a Counter-Strike clone. Itâ€™s entirely team-based (no bots included), with a good guy vs. bad guy theme. Each multiplayer map has specific mission objectives for each side to accomplish, so team members must work together to complete goals while holding off the enemy.

Covert Strike definitely has its fair share of problems that could have been easily fixed. Great graphics, interesting multiplayer modes, and a horde of missions, weapons, and enemies, however, still make it more fun and approachable than the original IGI. 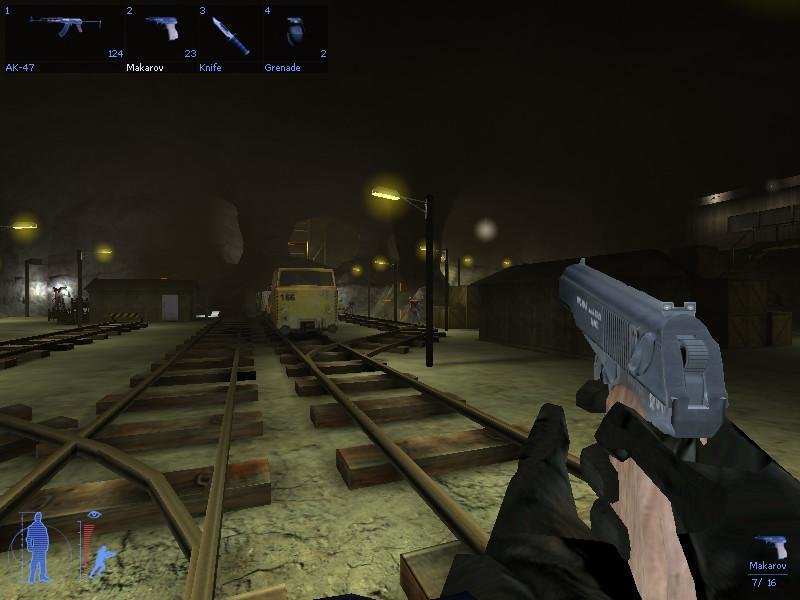