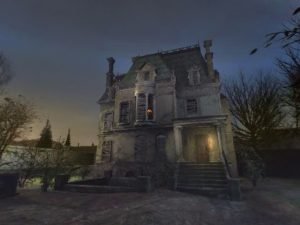 Picking up where Jonathan rescued Mina at the end of Dreamcatcher’s Dracula Resurrection, Dracula: The Last Sanctuary begins a week after the Harkers arrive in London from Transylvania. As this sequel begins, she’s suffering from a vampire bite and is being treated by Dr. Seward, who’s also trying to learn more about a mysterious ring Harker brought back from the old country. Harker heads off to Dracula’s last known hiding place in England, and off you go to solve a series of inscrutable puzzles.

After exploring Dracula’s mansion, for example, Harker has to make his way to Seward’s asylum — but instead of walking out the front gate, he has to figure out a way to open a passage in the mansion and make his way through the sewers. Once at the asylum, we’re handed a key that opens a door leading to…the sewers. Thrilling, eh? It’s just the start of numerous puzzles that revolve around getting Harker from point A to point B, and they’re about as exciting as silent film with no pictures.

There are literally dozens of puzzles in The Last Sanctuary — but with no characters to interact with, it all begins to feel as though Dracula is trying to kill Harker through sheer frustration. “Hot spots” are absurdly tiny, and what’s worse is that the cursor is planted in the middle of the screen: to find those spots you spin around in a dizzying circle, praying for the icon to change. 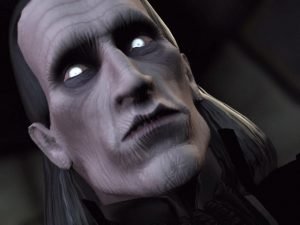 A perfect example of how tiresome this can be is in the cemetery, where Harker has to point a transmitter at three gargoyles (don’t ask); moving between pre-determined nodes, you stand in each spot and slowly look up, down, and all around in the hope of can pick out those gargoyles amidst the blurry 640 x 480 graphics. How hard is it? It took me over an hour. When you finally do locate a hot spot, there’s a good chance you’re not really sure what to do next — so you start trying everything in your inventory until something works. Fun? Hardly.

The great irony is that you wouldn’t know this was a Dracula game unless it said so on the box. Sure, the folks in the cinematics seem awfully concerned about this Dracula character, but you’ll spend so much time wandering tunnels and working through doors that the vampiric threat seems almost arbitrary. With frustrating and obtuse puzzles everywhere, and an environment that is as dead as the game’s namesake nosferatu, The Last Sanctuary makes for a poor sequel to a mediocre game.