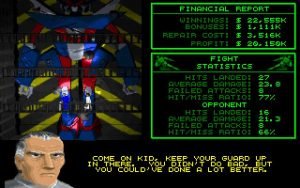 One Must Fall really surprised me. Even before I had finished installing the game, I thought it would be a huge waste of time. Then I found that One Must Fall wasnâ€™t quite what I expected. Iâ€™d played a little bit of the shareware version, and thought the graphics were uninspired. The robots seemed kind of blocky, unrefined, and even unappealing — definitely not the sort of thing youâ€™d expect to find in a 21st century fighting arena, and certainly not something I wanted to play.

Just a few minutes into the game, though, Iâ€™d completely overcome my initial dislike of the graphics. After all, my character was moving smoothly, responding quickly through a wide range of movements, and tearing up the competition. After a half-dozen rounds, I was hooked.

The designers no doubt studied what makes arcade fighting games successful, since they chose to give each of the ten robots in OMF different strengths, weaknesses, and agility levels, ensuring a unique battle just about every time you fight. Combine that with seven basic punches, seven basic kicks, and four special moves, and youâ€™ve got the makings for a great game.

If you just want a quick round of fighting, it as easy as selecting one- or two-player mode, choosing one of the ten characters provided, then a battle â€˜bot. No elaborate cutscreens to bypass, and no laborious loadtimes. Once in the ring, the bloodless clanking and crashing of the robots, coupled with the subdued dance-music soundtrack, gives the game a unique atmosphere thatâ€™s upbeat and entertaining. But the real action of OMF starts in the tournament mode, where four different tourneys have been included to let you “test your metal.” Starting with limited funds and Jaguar armor, youâ€™ll need to win the purse just about every time, pooling money to repair, upgrade, or trade your â€˜bot, if you hope to win a title. How you spend your winnings introduces a nice little strategic element to the game, and adds some meaning to your struggles.

Between rounds, the anime-looking characters will exchange odd insults with you (“You may wash my â€˜bot when Iâ€™ve beaten you!”), and a newscaster comes on to show highlights of the match. Thereâ€™s a distinctly Japanese feel to these sections, and they can get tiresome after a few rounds. But you can skip through all of it if you want. At the end of it all, the smaller quibbles don’t ruin the overall experience of OMF, which is an above average and pretty fun fighting game.