Shooting Antlions with the trusty .357

Half-Life was groundbreaking in so many ways that it fundamentally changed what people expect from first-person shooters in particular, and action games in general. Half-Life 2, on the other hand, is merely a massive refinement of everything that was good in the first. As such, it’s impossible for it to have the monumental impact of the first game. It’s not about reinventing the genre with the sequel, but rather refining and complementing it.

Game developers are notoriously bad at trusting their audiences. We assume that every story detail, every control function, and every game mechanic has to be exhaustively explained for fear of alienating newcomers. Half-Life 2 has no linear tutorial, no narrator droning on about what you should or should not do. The game throws you right into the action and says, “Hey, you’re a smart guy. Do something in this situation. See that scary dude? He’s a guard. How do you know that? Well, he’s wearing a uniform, and he whacks you over the head if you bother him.”

And then the best moment in tutorial history happens – There’s a soda bottle on the floor. Motioning with his gun, the guard barks at you to pick it up and throw it in the trash. Text appears on the screen “Hit “E” to pick up objects. Hit “E” again to drop them.” Boom, you’ve learned how to interact with objects in Half-Life 2. The moment is not only an effective tutorial, it’s effective drama, effortlessly tying a menial task with a context that turns it into a powerful conflict. You not only learn that the world is interactive, you also discover that you are its bitch. This is City 17, and the guards don’t look friendly.

This is because there’s quite a bit of Orwell in Half-Life 2, from the blue overalls to the oppressive surveillance and telescreens spewing speeches from some guy who looks like an English professor. Even under the strong jackboot of the state, Gordon has to pull through and find out what’s up. Where is City 17, exactly? It looks a hell of a lot like Prague, or any other major Eastern European city. Who are the Combine? Who’s the old dude in the turtleneck? Why does the coastline look like the Pacific Northwest? Is the whole world occupied, or just City 17? How come some of the aliens are your friends, and others want you dead? Moreover, who cares?

A lot of things have changed with Half-Life 2, and whether you love or hate those changes is purely a matter of taste. But where the game shines it’s something to behold. Take the new Source engine and the fully interactive environments. Virtually no one has managed to integrate physics into gameplay as thoroughly, or make it as satisfying as it is in Half-Life 2. Everything that isn’t nailed down or weigh too much can be picked up and tossed around, and the puzzles you’ll face make direct use of simulated physics.

Valve, like every other developer, licensed the Havok physics engine for its game, but tweaked the numbers to make it more realistic. And eventually you find a little item called the Gravity Gun that lets you drag things to it and then launch them, turning random junk into deadly projectiles. You can also use it to blast heavy objects like furniture, wrecked vehicles, and old washing machines out of your way. 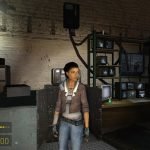 Half-Life was somehow succesful despite not having a sassy female sidekick. The levels are huge. You can assault that distant town with zero loading in between. 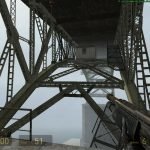 It wouldn’t be a HL game without vertigo.

You end up doing a lot of things that are both familiar and novel to shooters, and there’s a great deal of variety to keep away any sense of boredom. When not shooting it out with the guards you’re speeding through an old canal using a rickety motor boat, or a buggy down a depressingly decrepit coastal highway. Or crawling through an abandoned town filled with zombies (the game’s token horror portion in Ravenholm) or having the girl sidekick helping you out storm the looming tower you see at the start. As the game progresses, things get more opaque. The final part of the game is drenched with a trippy Pink Floyd-y otherness that would only have been compromised by specifics. You can miss out on half of the great stuff if you’re looking in the wrong place, but when you catch something it’s more rewarding because you caught it. Spotted the ever elusive G-man in the distance eerily staring at you? Try to reach him and see what happens. Or maybe you’d like to enter that creepy abandoned house near Highway 17, and find the familiar scoped crossbow but also a new enemy.

If you haven’t tried Half-Life 2 yet then you definitely should. It might not be as epic or influential as the original game, and neither the story nor setting are quite as foreboding or memorable as the sleek sci-fi dungeon that was Black Mesa, but Half-Life 2 is nonetheless a superlative shooter with plenty of fun, action and variety to make it worth one’s while.