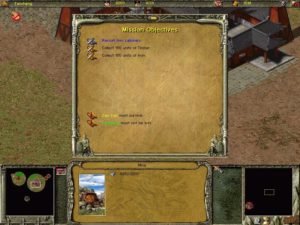 Chinese history turned into an RTS.

Here’s a concept… take one of the greatest classical Chinese novels about the post-Han Dynasty era, Three Kingdoms, and wrap a real-time AoE-style strategy game around it. Many consider the novel by Luo Guanzhong (circa 1300 AD) as important for Chinese culture as the Homeric epics have been for the West. Three Kingdoms, the novel and game, portray a fateful moment at the end of the Han Dynasty (206 B.C.-A.D. 220) when the future of the Chinese empire lay in the balance.

Fate of the Dragon shares a multitude of similiarities with Age of Empires 2, though it’s portrayal of Chinese culture has much more historical nuance than that of AoE (obviously). You get to play as any one of the trio of warlords, offering a difference in storyline but no real difference in civilization that you would normally expect from an RTS game. There’s not much setting the three sides apart, which is historically accurate, but bad for gameplay variety.

Don’t expect Fate of the Dragon to be as straightforward as AoE 2 either, since it gives you a multitude of resources to keep track of. Beyond metal, wood, and grain (corn in this case), you must also raise pigs and then convert the corn and pigs into wine and food for the troops. While they wonâ€™t keel over and die, hungry troops are almost useless in battle. This makes food management particularly important while campaigning away from home.

Fate of the Dragonâ€™s shining moments all come while your armies are on the road. The need to eat is actually a handy way to eliminate the “rush” tactic that frustrates so many RTS games — youâ€™re forced to consider supply lines, campsites, and where your troopsâ€™ next meal is coming from. All cities in the game are outfitted with sturdy gates and ramparts as well, meaning a hastily planned assault will see your men shot down by archers long before they reach the enemy walls. Enter the siege factor, by far the most fun to be had here. To lay siege effectively on an enemy town requires a great deal of manpower, careful planning, protected supply lines, and proper use of the awesome siege weapons. The scaling ladder lets you rush infantry up to the enemy walls, resulting in torrential battles on top of the ramparts. The malefic kite launches infantry up and over enemy walls, and there are plenty of ballista, catapults and other siege contraptions with which to hammer away at the townspeople.

For all its quirks and difficulties, Fate of the Dragon is a competent multiplayer RTS with a few interesting ideas. If you’re the type of wants a more challenging mold of strategy that goes beyond the AoE2 formula, then Fate of the Dragon might provide a few quick distractions.