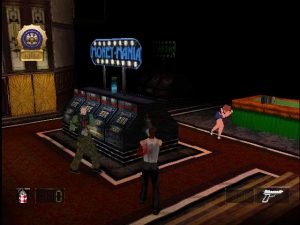 McClane craps out in Vegas.

Die Hard Trilogy 2 starts with hero John McClane in a fancy New York apartment. Him and Mully never patched things up after the third Die Hard movie, and receives an invite to a big party in Las Vegas. The bash is to honor old police buddy John Sinclair for being named warden of the shiny new Mesa Grande prison. This conveniently places trouble-magnet McClane right in the middle of a building chock-full of violent criminals.

It doesn’t take a fortune teller to guess what happens next: a riot breaks out, and a failed security system means the only thing standing between the ruthless felons and the innocent is McClane and his guns. But McClane’s work in Vegas doesn’t take place entirely behind prison walls; after chasing down a busload of baddies and hostages, he eventually uncovers a trail of conspiracy that takes him around Vegas in his fight to uncover the truth.

It’s no Oscar-winner, but there are enough twists to keep you mildly interested. Unfortunately, the same can’t be said of the gameplay, which rigidly follows the three-games-in-one design of 1997’s Die Hard Trilogy. The third-person action-adventure mode consists of just what you’d expect: roam each level from an over-the-shoulder perspective in search of bad guys and objects like security cards, and look for the exit. Sharpshooting mode is a time-warp back to the bad old days of rail-shooters where the only challenges are reloading your gun and making sure you don’t shoot hostages. Extreme Driving puts you behind the wheel to ram terrorists’ cars until they blow up or pick up the bombs they’ve left aroundr.

Viva Las Vegas’ only shot at redemption is squandered by blazingly average gameplay. Sure, you face a steady stream of enemies, but they’re little more than jerky, gun-toting zombies who always appear in the same places. Except for a flamethrower and an almost useless stun gun, McClane’s arsenal consists of a pistol, machine gun, shotgun and rocket launcher. In other words, it’s about as vanilla as a console game based on a hollywood blockbuster can get.