Itâ€™s impossible to tell how much American McGee actually contributed to the game technically called American McGee Presents Scrapland. Heâ€™s listed as both the creative director of Enlight Software and the executive producer of Scrapland, and he might be the main reason the game is simultaneously gorgeous, ambitious, and flawed. In essence, Scrapland is Grand Theft Robot, with silly minigames and childish humor taking place of lewd jokes and coke deals gone wrong. As the name hints, Scrapland is all about robots, and the teeming society theyâ€™ve created on a reconstructed asteroid. Youâ€™re cast as D-Tritus, a patchwork robot who bears more than a passing resemblance to â€˜80s-era John Stamos, complete with bobbing bangs and ponytail. Luckily, youâ€™re not stuck in D-Tritusâ€™s synthetic skin for the duration: In what proves to be Scraplandâ€™s best and most clever game mechanic, you can become, or â€œoverwrite,â€ one of 15 other robots, each of which sports a skill or ability that you need to solve puzzles, accumulate cash, or get out of a tight situation.

Some of their powers are extremely usefulâ€”armed cops pack a serious punch, and bankers attract money like magnets. Others, like the police chiefâ€™s sonic burp, are dubious at best (and yet, astoundingly, thereâ€™s a strategic value to belching in Scrapland). Either way, the thrill of changing forms is almost always short-lived. Floating robot beholders are usually hovering nearby, and theyâ€™re quick to scan and reveal you, sounding the alarm and spoiling the party.

Scraplandâ€™s central storyline revolves around your basic murder mysteryâ€”the Archbishop of Chimera has been killed and erased from the cityâ€™s Great Database, and itâ€™s your job, as a crack reporter, to get to the bottom of things. Youâ€™re given the choice to either follow the yellow-brick arrows that lead you to your next mission point, or, in Grand Theft Auto-like fashion, you can detour into bizarre side quests that involve everything from building and racing souped-up spaceships, to blasting cops and other robots for loot and weapon upgrades. Stylistically, Scrapland looks amazing. The characters have a cartoon-y, Futurama groove going, and the city itself is the kind of visionary, noirish setting Ridley Scott might have used in Blade Runner if he hadnâ€™t been so in love with rain and grime. Flying your ship around to explore the expansive game universe, and gawking at the huge towers, neon advertisements, and transport tunnels is one of the best parts of the game. Which is fortunate, because you spend a large chunk of time doing just thatâ€”darting back and forth between the four quadrants of the city. The game world is easy-come, easy-go, a place where your financial fortunes vacillate almost as frequently as your identity. This isnâ€™t a good thing: Itâ€™s frustrating to accumulate several hundred dollars by blasting a few ships out of the sky, only to lose it all a few minutes later because youâ€™ve strayed too close to a sneaky banker robot who siphons it all away. And donâ€™t make the mistake of being caught dead without a large stockpile of purchased extra livesâ€”otherwise, youâ€™ll be resuscitated in jail, where you have to execute the same escape sequence againâ€¦ and againâ€¦ and again.

Much like its protagonist, Scrapland is a creature constructed from the scraps of several different genres. Most of the pieces, like the flight combat and racing elements, are well-executed; others, like the gameâ€™s ship-building feature and the central mystery itself, seem either underdeveloped or a tad on the linear side. Maybe thatâ€™s the proof that McGeeâ€”who showed with Alice the ability to create an unforgettable game world filled with so-so gameplayâ€”is Scraplandâ€™s primary architect. If thatâ€™s the case, Scrapland still represents a step in the right direction. 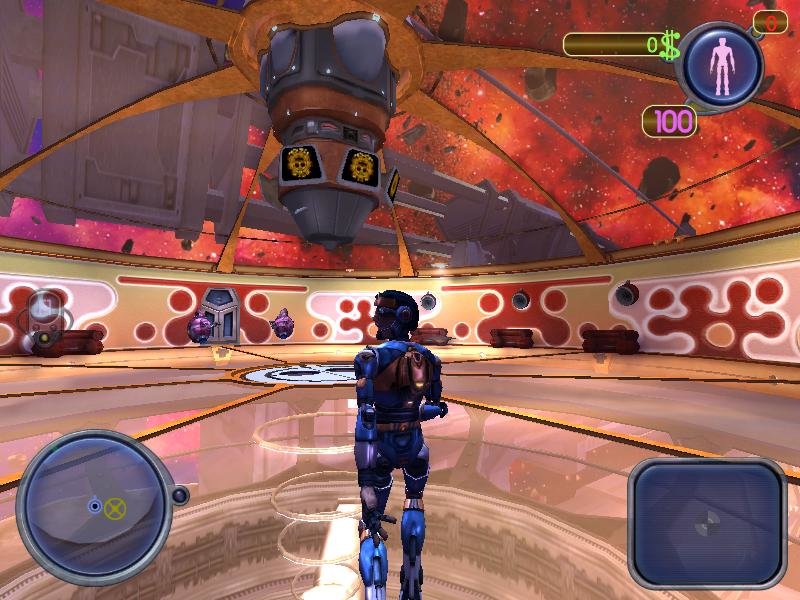