Dull and surprisingly dumbed down. Shooting it out cowboy style in Deus Ex 2.

The console mindset is everywhere in Deus Ex: Invisible War, the long-anticipated sequel to 2000â€™s masterpiece Deus Ex. This regression was based around a particular conceit: the idea that console and PC gamers are fundamentally identical. By itself, there’s probably some truth there. What it fails to acknowledge is that fans of the series had already played and lauded the original Deus Ex and that people were not daunted by, but had in fact embraced, its inherent complexity, especially given its themes: international conspiracies, a hard cyberpunk premise, and a strong emergent narrative.

Invisible War, on the other hand, was designed with console gamers in mind first and foremost. Due to the memory limitations of the Xbox, sprawling city levels are now reduced to street corners, and massive multi-level superstructures become collections of cubicle-sized rooms. Level loads are frequent and lengthy. Warren Spector, the studio director of ION Storm and figurehead for the series, has claimed that theyâ€™ve been able to focus on greater detail within these confined areas and create a more â€œintimateâ€ experience. What he neglected to mention was that the price for such intimacy is any sense of epic scale, which is an experiential metaphor whose absence sorely hurts a game with a plot and theme that supposedly spans the globe.

That said, the â€œintimacyâ€ angle does work well, despite the limited real estate. The detailed architecture and newfangled lighting model produce some gorgeous visuals, and almost every single one of the missions has multiple clear solutions. A little quick searching always turns up a nearby terminal to hack, a bot to commandeer, or a ventilation shaft to sneak around in. Like the previous title, the necessary equipment for completing a level is always available and smartly placed, even if itâ€™s a bit nonsensical within the context of the story.

Unfortunately, the AI doesnâ€™t take advantage of the simplified level design. It’s dumb and unpredictable, which often makes the stealth approach a trial of save-and-reload. Triggering an alarm often brings guards straight to you. The choice to use a unified ammunition model for the firearms is certainly a point of controversy among the more simulation-minded types, but it’s actually an original approach that works very well in Invisible War. Again, the small levels mean there arenâ€™t going to be any Serious Sam-level sorties going on, and a significant portion of the missions can be resolved without any gunplay at all. The same is true for location-based damageâ€”its almost complete absence in this sequel is largely forgivable, since the gameplay isnâ€™t centered on you being a soldier. You can always watch entertainment at the bar. One Hell of a mixed bag

Character development migrates from a statistics-based development system to a â€œbiomodâ€ one, where you add specific component upgrades to your persona. Biomods in the same area are exclusive; for example, if you choose the cloaking eye biomod, you wonâ€™t be able to gain the hacking one without invalidating all of the levels of cloaking first. This is a good system in concept, since it asks the player to pick a specific play approach. However, the implementation also has a big problem because in order to allow players some degree of flexibility, there are too many biomod upgrades offered too conveniently. Itâ€™s not only too easy to hit the character development ceiling early in the game, but itâ€™s also nearly impossible not to do so. These bots keep the peace – don’t attack them.

Now, for many fans, many of these mechanical flaws could be forgiven if the dense atmosphere of the original were here. And to some extent, it is. The main plot arc is a bit more predictable than that of the original Deus Ex, largely due to some recycled plot twistsâ€”although fans will certainly geek out when ex-protagonist JC Denton and his brother make the expected return. Disappointingly, the voice work isnâ€™t as good. Many of the same-looking character models speak in amateurish, hokey accents, and new protagonist Alex D (both male and female versions) is just boring to listen to.

But even without the qualities of the previous title, Invisible War is still an entertaining game most of the time. Itâ€™s accessible, itâ€™s not particularly cumbersome and itâ€™s easy to pick up and play. But when matched up against the complexity and challenge of the original Deus Ex, it’s just not as good. 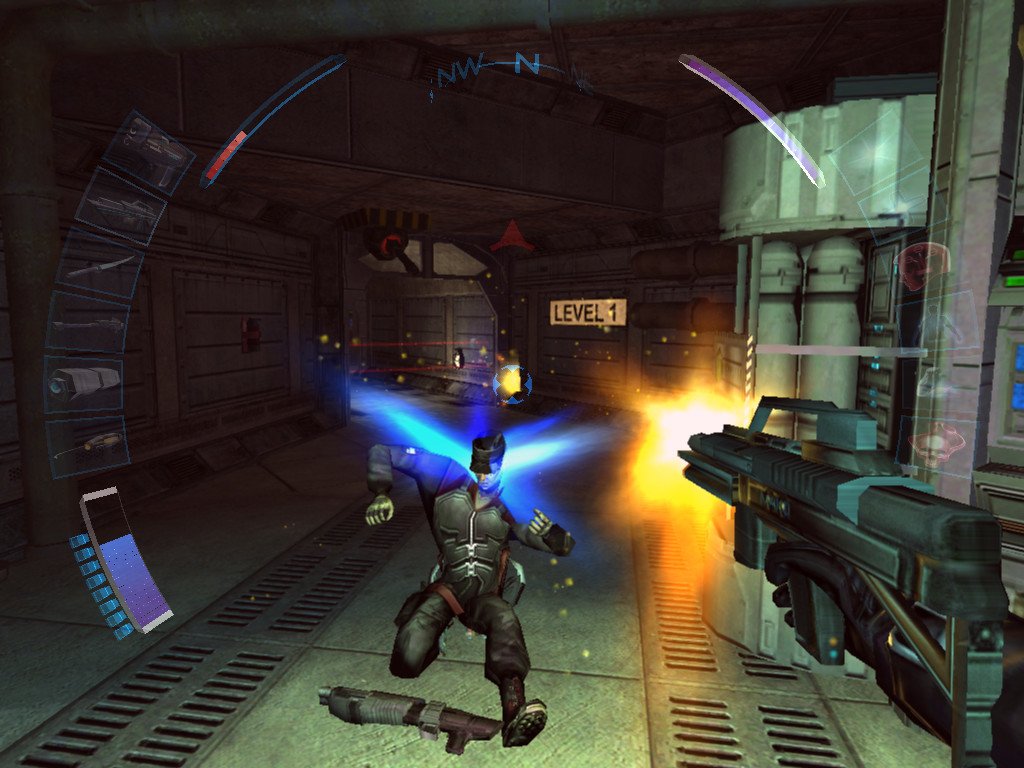