Big Mutha is selling her trucking business to one of her kids â€” whichever one can bring in the most money in 60 days. Off you go to outdo your siblings by trucking the high road and scoring big paydays. Sound fun and stupid? Check and check, though monotony may set in for some about halfway through. There just arenâ€™t enough roads or storylines to keep the journey captivating over the long haul.

There are, however, several aspects that keep this trading sim/action game interesting for a while. Pick a big rig, track trading markets, buy low and sell high, and make the occasional upgrade to your truck. Or race truckers to another town, which is great fun, but beware â€” the prizes, maxing out around $100,000, become truly insignificant once you start hauling loads worth 10 times that. Plus, while racing, youâ€™re likely to take damage and run up repair bills. 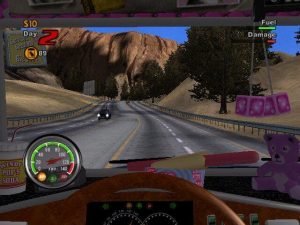 Big Mutha has a cascading damage system that offsets these damage costs to some extent. Hit two cars a few moments apart, and youâ€™ll get a $2,000 bonus; hit another car within a few moments for $5,000; and so on. Your reputation affects cop and biker behavior â€” cops will harass you if itâ€™s too low, bikers will harass you if itâ€™s too high. Bikers will even jump onto your truck, and if they get all the way to the front of your ride, theyâ€™ll take your entire load. The only way to get them off is to swing the trailer wildly across the road at high speeds, which can easily lead to more damage.

If youâ€™re getting the sense that Big Mutha is an unusual game, youâ€™re right. Itâ€™s filled with a ribald sense of humor as well, with extensive dialogue between your character and the various colorful traders, mechanics, and bartenders youâ€™ll meet in each town. 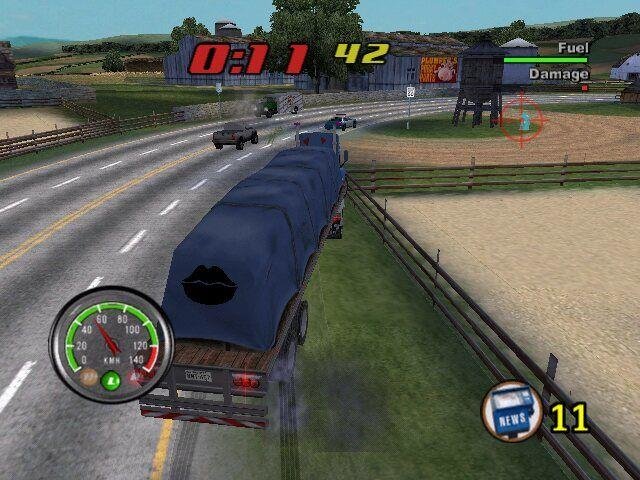