Two classics stitched into one.

Ever since James Cameron’s Aliens and John McTiernan’s Predator, people have salivated liberally at the possibilities for games based on both. Then came the classic wherein you portrayed either an Alien, a Predator, or a human Marine stalking your way or madly fleeing through deselate space stations, or mines, or what have you, all in first-person perspective. The environment was the same for all of the character choices, but the play style for each was quite different.

Aliens vs Predator allows us to visit several familiar sights from the original movies, such as the Atmospheric Processor from 1986’s ‘Aliens’, or the less memorable prison colony from ‘Aliens 3’. It’s the combination of familiar areas, foes, weapons and sounds ripped right from the films that give this game that cinematic feel, although most of the time it plays like a fast-paced and really brutal survival horror, minus the plot. There is none, actually, nor any real purpose to the game beyond eliminating the opposition.

You have a choice of playing as an Alien, Predator or Colonial Marine, essentially wrapping up three distinct playing styles into one. All three campaigns field six missions plus several bonus levels, adding up to a total of some 32 levels accessible through any order. So you can temporarily leave the Marine campaign on hold while having a go at the Alien campaign, or vice versa. In effect, each side has a vague storyline stringing the levels together, but its barely noticeable and completely disposable. The Alien, for instance, wakes as its hive becomes invaded by pesky humans, so you (the Alien) must kill the intruders and seal the hive. A follow-up level involves you hitch a ride on a Nostromo-like spaceship, with bloody results for the occupants.

Depending on which side you play as, you’ll face swarms of aliens that move with lightning speed, drones that kill you with one shot or Predators that  take several mags and still fight back. Combat is fast and brutal, but that same sort of havoc is what gives Aliens vs Predator that scary, frantic edge – like in the movie, it’s damn terrifying fighting off waves of super-fast aliens, especially with the game’s limited save option. The original lacked this option completely (you had to complete each mission in one run) but this Gold edition implements a savegame feature halfheartedly.

Rebellion tried as much, but couldn’t completely get all three sides properly balanced out, leaving the Marine too vulnerable and the Predator too overpowered. Colonial Marines compensate for their fragile bodies and limited vision modes with some terrific firepower, including the all-purpose Pulse Rifle and the auto-aiming Smartgun. Aliens go for lightning quick attacks while Predators posses the most specialized killing kit of all three. But the addition of a portable medkit and ample hitpoints and ammo make the Predator the most effective combat unit of them all. 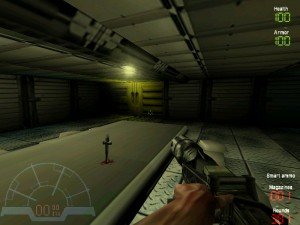 The pallet of enemies is thin. You’ll mostly face only one or two variations of randomly spawned foes that repeat on and on throughout each level – this randomizing effect is a mixed blessing. Two new weapons are included with the Gold edition, neither of them incredibly impressive.  Joining the SADAR in the “big, slow-loading, projectile weapon” category is the Skeeter, which throws out a disc that targets enemies, and throws bolts at them. Lastly there’s the pistol, which you can dual wield. Sounds cool, but neither are very useful in combat against either species.

Try this game if you enjoy the movies – you’ll find several bits that will take you back. But know that the action is very tough. The limited saving and randomized monsters can generate a surprising amount tension as the Marine, which is easily the most frightening and most fun character to play as. The other two are interesting for being different, but skip out on much of the suspense, and playing as the Alien is downright nauseating at times. AvsP has its flaws and frustrations, yet few first-person shooters have managed to recreate this level of pure tension with such a simple formula.