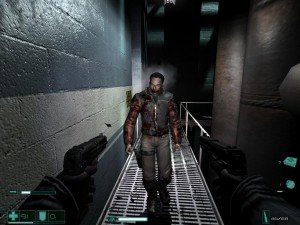 Be ready for a creepfest.

Monolith’s game has a story tucked away somewhere to provide some logic to your continued prowling of corporate and industrial facilities and slow-mo gunfights, but it’s usually difficult to keep track of. What you need to know is that you’re part of F.E.A.R., a super-secret cracksquad used to contain various paranormal threats when they arise. Latest on their to-do list is keeping the lid on Paxton Fettel, escaped research lab rat who manages telepathic control of an entire army of soldiers. The game kicks off after his troops burst into Armachan Technology Corporations and started killing people.

You’re conveniently separated from your team at numerous stages, to the point where most of the game is played solo against Fettel’s troops save for the very rare escort assignment. The game is presented like a psychological horror shooter, and as such you’ll frequently experience bursts of supernatural weirdness every now and then – this often comes in the form of a little girl ripped straight out of The Ring stalking you, her haunting purpose never fully revealed until the final hour.

It’s all about atmosFEAR

But otherwise and for all intents and purposes, this is a smart shooter wrapped in survival horror overalls. Although it does manage a genuine sense of dread every so often, you’re never really in as much danger when facing supernatural threats as when you’re shooting it out with a squad of heavily armed soldiers – lights flicker, there’s an eerie silence, you hear static on your radio and see the little girl out of the corner of your eye. It’s initially spooky but becomes business as usual when these gimmicks are repeated again and again.

This isn’t really a bad thing, but the spookfest does run dry as a result of it being so formulaic. On the other hand, gunplay is where F.E.A.R. really shines, with special thanks to the game’s trooper AI turning an otherwise good game into a great one. Squads of soldiers work as a single unit in a battle, actively working to outflank you whilst firing from cover, flushing you out with grenades and delivering bits of radio chatter in between. It’s got that familiar Half-Life feel to it, where you can get a rough estimate on what’s going down by listening in on their chatter.

A very useful ‘slow-mo’ feature allows you to tackle some of the harder fights Max Payne style, with bullets whizzing past left and right as you aim for head shots. It has the consequence of making the game a little too easy (the slow-mo meter recharges over time like your flashlight) but for the really hard parts, like when you’re facing airborne drones, it’s a welcomed lifesaver. Whilst the bulk of the game is spent fighting soldiers, you’ll also tackle huge mechs, automated turrets, melee fighting ‘Assassins’ (these are some of the scariest enemies) and floating ‘Nightmares’ that cross from the void and pop into a stew of blue ectoplasmic crap when killed. 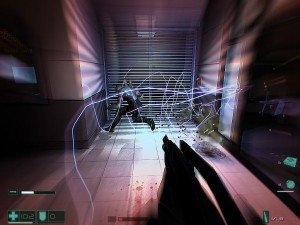 The fights enjoy some infusion of realism. You can only carry three types of primary weapons and three flavors of explosive devices (grenades, mines, etc.) at any given time. Although you get a pretty broad selection of guns from your generic pistol, shotgun and machinegun combo to a cool rail gun and instakill handcannon, the sparse availability of ammo for the more exotic guns means you’ll rely far too much on the standard shotgun, machinegun and SMG for most of the game. Mixed with the same environments and limited enemies make the game feel kind of repetitive halfway in, if still amusing nonetheless. 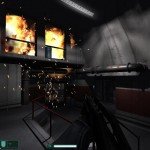 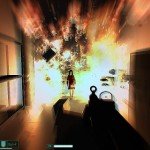 A vision of Alma, the creepy girl. 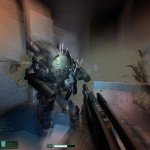 The graphics are good but not spectacular. There’s a great deal of sinking monotony as you play through the same industrial buildings, corporate offices and secret research labs again and again. You get a similar limitation in level design with Raven’s Quake 4, which was released at around the same time, but at least that game offered superior graphics to compensate. F.E.A.R. boasts more mundane looking levels but with smarter and more spectacular firefights.

I’ll be damned if I could make much sense of the story. But you’ll find it’s easy to enjoy F.E.A.R. even if you don’t get much of the overarching narrative behind it. The fights are clever and the moments of genuine spookyness are rewarding, and it’s well worth picking up.