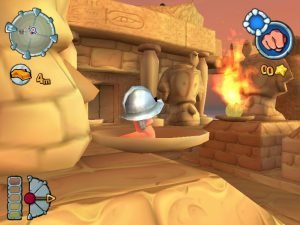 Even with its transition from side-view 2D to a less appealing but conceptually sound 3D, the Worms formula has changed very little since the original 1990s game. A few new weapons were added, some gameplay modes, an extra dimension was thrown in, but the integral part of the experience was about the same. Worms Forts: Under Siege, the second game after Worms 3D, attempts to inject the series with some more strategic thingamajigs that makes it feel like an odd blend of Worms and real-time strategy.

The star feature in Forts is building up your base around the map in preset locations. You can do this at the start of each round. Build up your base farther enough to access special points (tiles represented by floating stars), and your team will gain special bonuses as long as you have a structure placed on that location. These bonuses may include access to more powerful weapons, or a limited number of respawning of dead worms. Before you can access these enhancements you have to build up your base far enough to reach these points, which isn’t all that easy since every building must be interconnected.

If the opponent destroys one building, then all the buildings following that one are destroyed too. Harsh. Landing two victory locations gives you access to a keep, which gives you more weapons to play about with, three victory locations gives a castle and four gives a citadel where such weapons as the Worms God can be employed. On top of these fortifications, along the way you will an even wider range of functional buildings – like the weapons factory.

The focus on base-building, however, completely changes the focus, and you’ll either love it or hate it. Blowing up your opposition with outrageous and comical weapons takes a backseat here as each team is clustered up on opposite ends of each map. Also, most of the more powerful weapons can only be shot from a building. Again this changes the gameplay dynamic significantly, more so than in any previous Worms title.

You also have access to a campaign mode where you get a large portion of scripted missions that are a mix of arcade action and puzzle-solving. The computer AI, however, is probably the slowest one you will ever see. It’s intent on sucking up every worthless second of its round and, best of all, it can’t be skipped. A Worms game needs to be fast paced, lasting a maximum of half an hour, but in Under Siege a half hour is the minimum time you’ll be spending in a mission. The graphics engine is unchanged from that of Worms 3D, employing the same stylised, cartoony 3D effect with large, washed-out textures. It’s also got those annoying problems that were never fixed from Worms 3D – a troublesome third-person camera system, a limited birds-eye view of the landscape, crappy movement and iffy shooting mechanics. It’s not terrible, but oh so definitely requires some struggling before you ease into it. Which you may or may not do depending on how digestible the forts system is to you. If you want traditional strategic blastathons with exploding sheep and grannies, look elsewhere.