Some of you who grew up in the 1980s might remember the movie TRON. It came out a time when cheesy dialogue and bad acting didnâ€™t detract at all from some amazing (in the day) special effects, and the absolutely gripping idea of playing videogames from within. You may very well remember plunking pounds of quarters into the hit arcade game, which actually ended up earning more money than the movie. You are the target market for TRON 2.0, the enthusiast PC user and hardcore gamer.

Alan Bradley, the guy who created the TRON program in the movie, still works at the same company and is trying to fix the â€œdigitized real-world objectsâ€ technology used to zap Flynn into the computer two decades ago. You play his son, Jet, who gets zapped into the computer world by an AI helper program in an attempt to stop this big bad system-wide corruption. From there the plot develops mostly through a handful of brief cut-scenes, short conversations at I/O nodes, and emails you uncover from data bins. None of it is really all that fascinating, and the dialogue and voice acting is almost as cheesy as that in the original film. If this is the designersâ€™ idea of an intentional homage, itâ€™s misguided. Monolith softens the blow with plenty of computer in-jokes to make geeks chuckle. 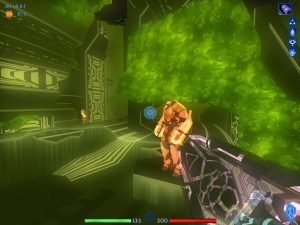 This is unimportant, because the real star of the show here is the wonderfully crafted world. Monolith manages to perfectly nail the whole TRON vibe while simultaneously updating it for modern times. Screenshots simply do no justice to these glowing, pulsing, humming levels that feature a sense of scope that easily rivals any games out there. Score one for Monolithâ€™s art direction. It further solidifies its TRON-ness with spot-on sound effects and a likeable, familiar musical score. Best of all, it runs quite smoothly, and is optimized to run on a whole range of systems.

You steadily improve Jet by finding hidden â€œbuild notesâ€ scattered throughout levels, completing objectives, and downloading objects from data bins. You pump up core stats like health and energy over time, and can swap out which abilities and weapons you want to use at any time using a very slick disc-shaped interface. This upgrade element adds more to the game than expected by giving you interesting decisions to make. Do you download that unknown subroutine from a data bin and use up the last of your energy? Which subroutine should you upgrade with this one-use Optimization Ware? Would the LOL rifle or Ball Launcher be more useful on this level, since you donâ€™t have room for both? Between all the upgrading and exploring fantastic environments, you almost donâ€™t need any combat to have fun.

But thereâ€™s combat around every turn. The disc is like the lightsaber in Jedi Knightâ€”other weapons have their uses from time to time, but you keep coming back to it. Itâ€™s just too much fun to fling, bounce around corners, and curve around objects to hit that enemy taking cover, and mastering its defensive properties are crucial to success. If you treat this game like any run-and-gun shooter, you simply make an already challenging game into a tedious exercise in pressing that quick-load key.

Interestingly, TRON 2.0 embodies almost all the hated conventions of first-person shooters and gets away with each and every one of them. Crates? Yeah, it has digital boxes galore, but they mesh with the design aesthetic. Re-spawning enemies? It makes sense when programs simply â€œres inâ€ to new sectors of the computer. Even the standard button-pushing and lever-flipping goals make sense in the binary, on-off logic inside a computer. You spend 15-20 hours playing through the single-player part of the game, and the upgrading, environments, and disc combat mechanics pull you right along. Along the way, you hop onto the light cycle grid several times, and it plays just like you remember, with a few powerups, more interesting arenas, and speeds zones thrown in for added depth. Thereâ€™s also a separate light cycle circuit where you play a series of 17 challenges, unlocking better bikes and new powerups as you go. It takes a few hours to beat them all, and you can always fire up a random game against bots with dozens of parameters to adjust. Itâ€™s not a major selling point, but a nice bonus thatâ€™s worth your time.

A casual computer user with a passing interest in that old TRON movie they remember would probably find TRON 2.0 too challenging, and too hardcore. But gamers will find a polished, deep, feature-packed first-person shooter that could keep them playing all night. Perhaps the best reason to play it, though, is that it manages to continually stun you with a look thatâ€™s beautiful, cool, and totally different from everything else.