This first real Quake-killer is true to its name.

Having been over three years in development prior to its release in 1998, Unreal went through numerous production phases and was originally conceived in a time when 3D accelerated graphics were non-existent. In its later stages it was heavily marketed as the game that would revolutionize 3D shooters, and when it did hit shelves – several months into the release of Quake II – its timing couldn’t have been better. 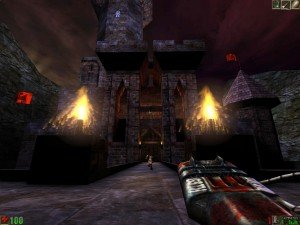 The story of Unreal is surprisingly simple, though it’s interesting enough to point out. As a nameless prisoner trapped on a crashed prison ship, you find yourself alone as the human crew is slaughtered by an alien force. You escape the bowels of the downed starship and discover a large, rocky world teeming with strange life – a planet inhabited by a peaceful race known as the Nali. Things look bleak as you find that the Predator-inspired aliens who’ve attacked the prison ship have also invaded this world, killing or enslaving the locals, and that your only means of escape is facing the aliens head-on, guns blazing.

As far as technical detail, Unreal had some of the most amazing visuals you could hope for at the time. The steep hardware requirements meant users had to upgrade their existing machines to enjoy the game’s coveted 3D accelerated mode. While software rendering will run by default, a 3dfx video card had the potential of turning an already good looking game into something much more deserving of the game’s title – even if it did meant running you back a few hundred bucks.

Unreal was powered by Epic’s first installment of the excellent UnrealEngine, found here using a mapping technique called BSP. Binary Space Partition can best be understood as a language that establishes the order in which ingame geometry is drawn, having a great impact on the way levels are built. Most importantly it allows video cards not to render pieces of geometry which aren’t immediately visible, giving way to higher framerates and more freedom to cram the world with detail. 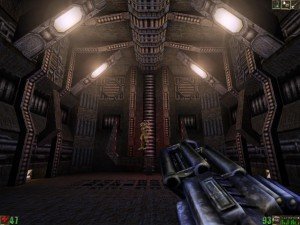 The Unreal Engine had some great light and shadow effects. And check out those lens flares!

And that’s exactly what they did. Tiny insects buzz around rocky landscapes, busted equipment hiss loudly and thick red fumes rise over lava plains. Where before shooters were pretty much limited to closed, monotonous spaces (eg: Quake), Unreal displayed both colorful interiors and large open worlds unlike anything seen before. In short, Unreal was the Crysis of its day. Apart from just looking good, the engine was extremely easy to reverse engineer into whatever shooter you wanted to sell. After heavy licensing, games like Deus-Ex, Klingon Honor Guard, X-Com Alliance, The Wheel of Time and many more projects were rocketing ahead in production just months after Unreal had shipped.

Unreal itself plays in regular FPS fashion as far as an alien shooter, although it does advance one or two facets of the genre. Maps are played out in linear fashion but they’re logically connected and give a good sense of progression. You intuitively advance from the broken hull of a spaceship, to crash site, to Nali village. There’s some level of inconsistency with regard to level design (some are harder than others) and this is probably due to Epic’s use of multiple designers. But credit should be given to Unreal’s sense of variety – ancient temples, starships, castles, villages and dungeons are all on your travel book. 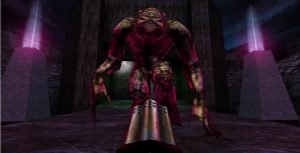 A clever host of scripting also ensures that some of the more important events are memorably highlighted, like the first encounter with a Skaarj. The aliens themselves in Unreal have a lot of fight in them, and killing them takes some good reflexes alongside serious firepower. This holds especially true for the Predator-like Skaarj, who have a nasty tendency of pouncing on you and skilfully dodging your shots.

Some aliens even exhibit simple group tactics, like the Mercenaries. One will cover the other as they advance to your location and seeing them in action is pretty cool. One final advancement as far as AI come from the multiplayer bots, which were the first of their kind in deathmatch games. 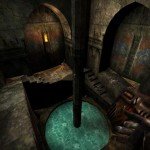 The light effects in these old temples look really cool. 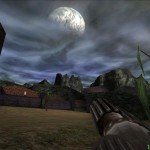 A peaceful village at dusk. 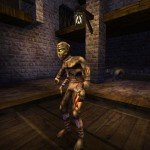 The Nali will sometimes help you out.

As Beautiful As It Is Plain

Unreal would have scored higher on gameplay if it had an actual story to tell, or simply if there were more stuff going on around you. The plot is thinly presented and mainly comes packaged in the form of written logs or simple messages on computer terminals. There’s not a single line of spoken dialogue. Other minor grievances include slight weapon balancing issues (the Flak Cannon is much too powerful) and some of the levels are too confusing to be solved intuitively, needing a whole lot of trial-and-error navigation to get through.

Running the game to its full visual potential in hardware mode takes some tweaking on modern cards. While the boxed copy was specifically designed to run under 3dfx in its day, the original API may be simulated with this free Glide wrapper. Unreal Gold, containing both the original Unreal and the Return to Na Pali expansion while supporting both Glide and modern Direct3D, which means that it can easily run in hardware mode.