Project Nomads is avery odd mish mash of several genres. The story is a post-apocalyptic sci-fi trip through a fractured world inhabited by a nomadic populace. You are given three characters to choose from, with names that are surprisingly bland considering the sci-fi fantasy motif of Nomad’s universe. John is the adept engineer of the bunch, looking aged and scruffy, while Susie is the mage and resembles a raver girl, complete with pixie wings. For all intents and purposes, despite their appearance, these two characters are functionally identical in use. The third character is the warrior Goliath, who’s a hulking monstrosity. While his weaponry is by far the most powerful, its slow rate of fire makes it much more difficult to take down moving targets. Gameplay is a mix of third-person fighting, building, manning turrets and even flying in special crafts. You have to guide floating islands from one location to another, ensuring that its lighthouse, the magical device that holds the ground together, survives each battle. There are many other artifacts with which to outfit an island, and they come in two varieties. Blue artifacts are immortal; while the structure built from one can be destroyed, the relics themselves will be returned from the debris and can be used again. Red ones, however, can only be installed once.

Each island also has one watchtower that serves as a helm. While players can choose to travel in any direction in multiplayer games, throughout the course of the solo campaign, movement is handled by the use of waypoints given out after various objectives are completed. This limits the use of the watchtower to merely turning on and off the engines, pausing movement until repairs can be completed. Energy is an important aspect of Project Nomads. Not only does it take energy to build new structures, it’s also required to repair them. Having a power plant is always necessary to keep energy levels up, though having a collector factory helps as well. Collectors are small factories that launch helicopters that fly out to other rock formations and mine for carbon, which they return and burn within their furnaces.

The structures that can be built on an island have to be placed on predetermined sites that function as sockets for their construction. Because of this, players must be careful to place turrets at locations that are vital for defensive purposes and make sure that the profiles of surrounding buildings don’t block their firing arcs. These gun towers can be commanded at will, though turrets that are level two and above will aim and fire at enemies without assistance. Aircraft hangers are also available. They’ll automatically launch a fighter in defense of the island, though it’s possible to jump to their cockpits and use them for more offensive purposes. Should one be destroyed, the player is returned to the view of their character and the hanger will begin producing another plane if there’s enough energy available to do so. Players must seek these artifacts out by destroying rival islands and exploring far-flung territories. Characters are equipped with a jetpack that needs to be activated in each level by finding a certain power-up. Initially, only three artifacts can be held at a time, though as the game progresses, the number of slots the character’s belt can hold increases substantially. Offensive spells can also be collected. They only fire at targets that are level with the player, and as such, are primarily useful for ground Skrit beetles and other creatures primarily limited to the more adventure-based portions of the game.

All of this sounds interesting and very complex, but a host of basic design flaws hamper the fun factor of the game. The adventure aspects of Nomads is more simplistic than it sounds, merely involving the collecting and combining of artifacts in order to have an advantage in what largely amounts to a rail-shooter – where play consists of merely firing at targets as they appear. Even as a shooter, Project Nomads has its failings. Many levels drag on to the point of tedium. In others, unlimited waves of enemy fighters are unleashed, only to be broken by the player triggering a plot element by leaving the gun tower. As these situations both occur many times over, there’s never a consistent way to approach the game, leading to no small measure of frustration. The game sometimes throws something new in, such as having to fly a plane in formation through a field of debris, but these sequences are also filled with their share of annoyance. Not only is collision detection skewed, but goals are never made specific, leading to confusion about where to go in order to trigger the next event.

In the end, Project Nomads is a rail-shooter in which victory depends not on reflexes and accuracy, but having the persistence needed to stop the island at various intervals and use long range weapons to disable enemies that are often outranged and can’t fire back. There’s definitely some creativity in the product, and the graphics are nice, but it’s just not a classic. 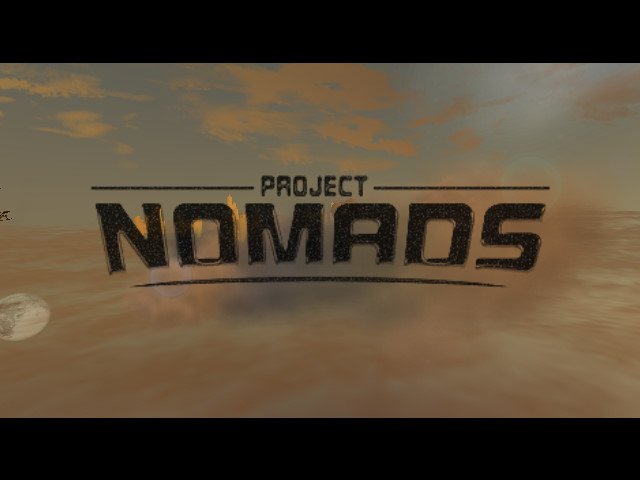