Perhaps the best WWII-era sub sim out there!

Here’s something that might surprise you – Silent Hunter 3 was developed in Ubisoftâ€™s Bucharest, Romania studios, by a team that previously created racing titles (Speed Challenge and Downtown Run). If that won’t raise a few eyebrows, especially considering Silent Hunter 3’s remarkable success as a World War II era sub sim, then I don’t know what will.

As with land-based combat, naval battles during the Second World War has a sort of dramatic grit to it that was lost in today’s more modernized and computerized forms of warfare. Everything was more primitive, everything was deadlier, and never since or before had submarines played such a strategic and notorious role in active warfare. As fans of the previous games might expect, Silent Hunter III follows in the footsteps of its immediate predecessor in placing the player at the helm of a German U-Boat – and boy what a ride it is!

Silent Hunter 3 is as much as an RPG as it is a sim. You are a a WWII U-boat commander with a career played out in a completely dynamic campaign in which you can decide for yourself what defines success. Do you want to see if you and your crew can survive the entire war? Then you may circumspect in the risks you take. Or do you feel it is your duty to throw caution to the wind and try to sink everything in sight? Then you will likely have a short but glorious career. More often you’ll take the middle ground. You gain fame if you do well, and you can upgrade the equipment and crew by trading on that fame. As the war progresses, youâ€™ll have the chance to pilot the Type II, VII, IX, and XXI U-Boat models, covering all of the major types used by the Nazis. It will also have an emphasis on crew management. You can keep the same crew during your entire career, and they will evolve according to the results of your patrols, with rewards in the form of rank, skills, and medals. Crew performance will also vary during a mission. One fresh from shore leave is likely to perform better than a group exhausted by combat. During missions, crew members transmit vital information, and bark affirmatively when issued new orders.

Even though Silent Hunter 3 relies on simpler equipment, that doesn’t mean attacking the enemy is easy. With no computers and GPS, you often have to get close enough to eyeball the enemy before launching your torpedoes. At full realism settings, you have to hand-calculate the angles, speed and distance to the target, the gyro settings for your torpedoes, and more – although you can let your weapons officer do the math for you. Although difficult to learn and requiring at least a partial read-through of the manual – serious sub simmers couldn’t expect any less – Silent Hunter 3 is also accessible to new players. A wide range of video and interactive tutorials are designed to ease in such players into the secrets of World War II submarine warfare. In this respect, Ubisoft took advantage of the AI crew to offer feedback to casual players. There are numerous customization options for each realism mode to placate both parties without alienating either. In expert mode, the default is to have external view cameras off, but you can turn them on during the mission if you want. In casual mode, you can have an automatic solution for the torpedo, but you can choose to manually adjust the torpedo settings for launch (target speed, distance, etc.) as in expert mode.

In short, Silent Hunter 3 features an ambitious design that aims to up the bar in the holy triumvirate of gameplay, realism, and graphics. For any serious submarine enthusiast, it’s a game to be reckoned with. 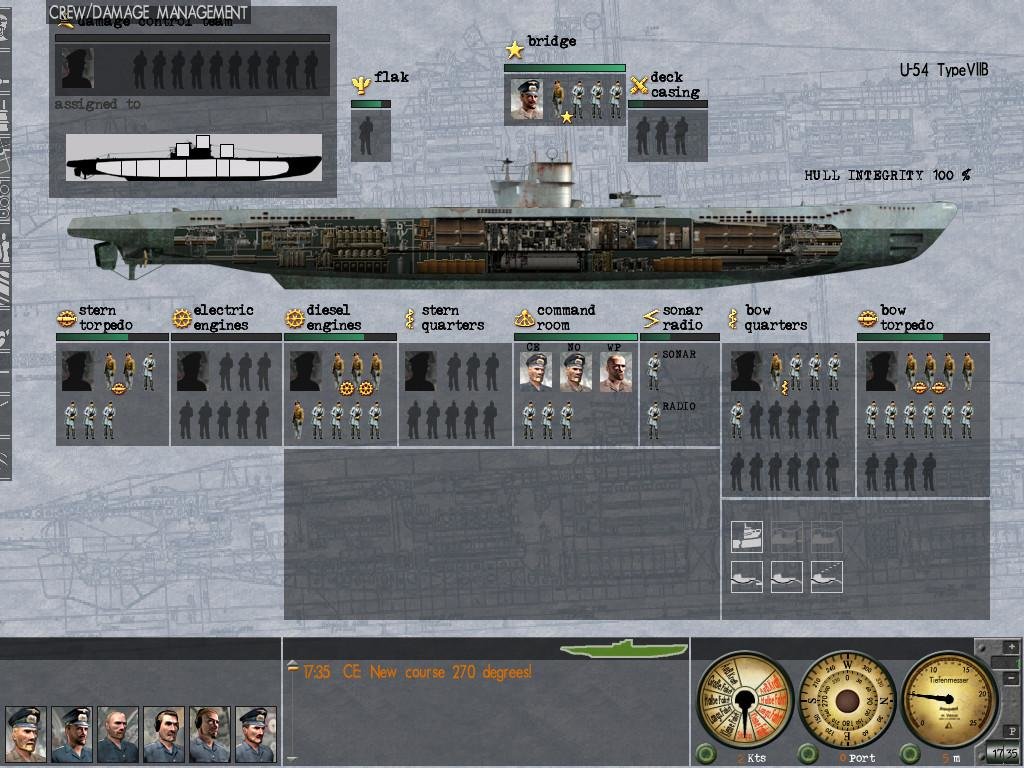