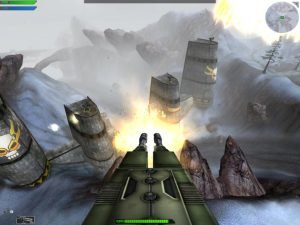 The Tribes series has always been an anomaly. While critical praise has been nearly unanimous, many players discovered that it was not your standard first-person shooter. Tribes is perhaps one of the most complex FPS games available, requiring massive teamwork in multiplayer, and good control over one of the game’s most vital gameplay mechanics – jetpacking. When some players discover the complex dynamics involved, despite the fast pace and sharp graphics, it’s not really a run-and-gun game, and they simply went back to other shooters they already understood.

In the hopes of keeping more players around, the latest version of Tribes-dubbed Tribes Vengeance-has a single-player game. Developed by Irrational Games, it’s well crafted, with a surprisingly good open-ended storyline. While the plot itself is convoluted and has more twists than a particularly twisty pretzel, it pulls together well toward the end. You play the game as several different characters-both male and female. Sometimes alone, other times with an AI teammate.

Irrational Games has tried its best to make a compelling and scripting-heavy singleplayer game for Tribes: Vengeance, the third PC game in the franchise. Gone is the Torque engine, and in its place is a highly modified Unreal engine with the Karma physics replaced with the Havok physics engine. You will get to play five different characters, and for a change, solo play and Tribes are mixing well. Besides the complexities and unique strategies offered up by the universe, the most obvious difference between this game and most others is that everyone has a jetpack, allowing them to fly around each of the levels. That dynamic alone takes plenty of practice. Mix in “skiing,” which is the ability to sort of jetpack/jump down hills and rapidly gain speed, and you have a unique formula that may befuddle many FPS veterans.

Gone are the claustrophobic interiors and smallish exteriors that populate most games of this ilk. In its place are sprawling outdoor environments with high peaks and low valleys, complemented by buildings with high ceilings and multiple levels. Vengeance, like its predecessors, is certainly more vertical than most FPS games, and it also demands teamwork in multiplayer, especially as the battles get larger.

Luckily, the single-player game teaches the new players everything in a satisfying manner. There are sections that train you how to ski without seeming completely out of place, and there are other levels that explain the nuance of the jetpack without outright saying, “These are the nuances of the jetpack.” It’s edutainment for the multiplayer game, if you will, but that’s only the first level or two of the solo campaign. You’re eventually thrust out on your own, and you slowly learn how to use inventory stations, deployables, and the various weapons. While the tactics are still up to you, this is far more offline experience than either previous game ever offered, and it should help acclimate new players to the Tribes universe, saving them from the humility of learning while being slaughtered online.

Despite the solid-looking single-player, Vengeance is really about the multiplayer game. Veterans will feel right at home with most of the controls and mechanics, and there are many easy-to-recognize items around, including inventory stations, power generators, and so on. However, plenty has changed. You’ll notice that deployable stations—for turrets, remote inventory stations, and so on—have their own individual stations now. You’ll also notice a lot of things missing, including satchel charges, deployable sensors and radars, ammo packs, and more. 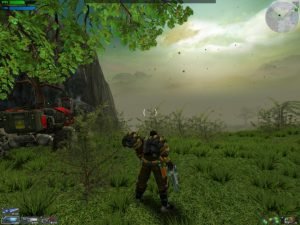 Several tweaks have been made to streamline the gameplay a little bit. For example, there are no sensor or radar deployables because each side has a main satellite that provides coverage of the whole map. If your team’s satellite is destroyed, you will not be able to see any enemies until it’s repaired. You’ll also discover that snipers now have ammo attached to their gun—there’s no more camping half a mile away and picking off people for the duration of the map. Mines are also now deployable, so there’s no more dropping them like bombs and detonating them with your spinfusor.

The six vehicles from Tribes 2 are also AWOL. In their place, we get the Fighter and Assault Ship in the air, and the Rover and Tank on the ground. While these serve the same purpose as the previous vehicles, the dynamics have changed a little bit. The vehicles, in general, are somewhat easier to control, and they’re no longer the literal tanks they once were. In other words, there’s no crashing your Shrike into a base at 120mph to get a flag. These vehicles will do damage if they hit you, sure, but they are not the roadkill machines of the past.

Finally, the giant turrets that are found on most maps are no longer automated. Each is manually controlled, and with good reason: these things pack a major punch. Like everything else, though, they’re vulnerable to enemy fire and if you happen to be in it when it blows, chances are you’re going with it. This is similar to the turret situation on most Onslaught maps in Unreal Tournament 2004, and it’s a nice change. Best of all, it forces different team strategies both offensively and defensively. 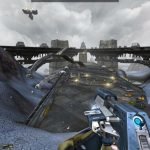 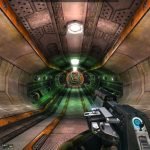 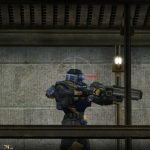 These changes may sound drastic, but in practice, it’s minor, especially given some of the new toys you’ve got. There’s a grappling hook that allows you to swing around like a certain comic book hero, and you can also use it to attach to other players, in effect slowing them down and speeding you up. (The hook isn’t strong enough to permanently attach to players.) There’s a rocket pod, which shoots out six rockets in a spiraling pattern that separates the further it goes. It’s nasty at close to medium range. There’s the buckler, which works like the hat that Oddjob used against James Bond in Goldfinger. And there’s the burner, which spews out flaming plasma and has a damage-over-time effect. Of course, all your old favorites are here too, including the spinfusor, the chaingun, the grenade launcher, and the devastating mortar. 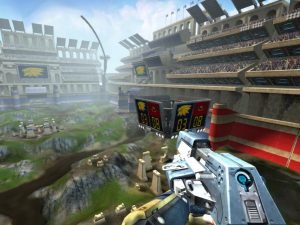 Online play will come in the form of Capture the Flag, but also included are Fuel (think Hunters from Tribes 2), Arena, and Ball. Arena is a sort of Team Deathmatch with areas to capture and hold for points. Fuel, like Hunters, scatters a map with fuel cells instead of maps, and the team that can collect the most and bring them back to their base wins. The sneaky are free to siphon off the enemy’s fuel depot. And Ball is best described as soccer with guns. Much like Bombing Run from Unreal Tournament, Ball has a centrally located ball of sorts that has to be thrown into the enemy’s goal for points.

In all, Tribes Vengeance has shaped up to be something special. The game is familiar for veterans but has been made much easier for new players to enjoy as well, especially with the inclusion of a single-player that isn’t laughable. Irrational has done a good job of keeping everything familiar while making enough minor tweaks to keep things fresh.